So I brought in some Intova digital camera product... 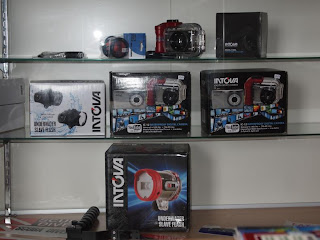 I want to carry some underwater cameras in the shop so I brought in some Intova digital cameras and assorted items (red filters, wide angle lens, strobes/trays/fiber optic connectors) to try, as well as the $20 reusable film cameras that are good to a hundred feet. The digital cameras I brought in are 12 megapixel cameras housed in a housing that's good to 180 feet. If they're any good, they're a heck of a deal for under $250.

Some time in the next week or so I'll try to get out diving with one to see what it can do. I'm looking at keeping at least one for rent on the boat. I figure $35 a charter is a decent rental price for a camera that you can take a lot of stills and video (it shoots 720P HD video too), and I'll apply the first day's rental towards purchase of the camera if anyone decides they want to pick one up within a week after trying it. I'm hoping they're relatively easy to work with, like with any camera there's always a learning curve. I'll report back after I give 'em a shot.

I do plan on carrying some other photographic equipment down the line. Gotta get a start somewhere...

I'm testing the video from my phone on blogger


I picked up a new htc thunderbolt cellphone that I'm having fun with . it has voice recognition so I'm trying to do this without typing as much as possible .
Posted by Steve at 7:23 PM 2 comments:

Scuba diving the day after a tsunami in Kona....

It was a great day of diving today. The customers were happy and Bob said the viz was in the 100-125 foot range. I'll do one of the dives tomorrow, I was up top for both today. Just thought I'd mention the conditions today... flat and clear... as some people might be curious as to how the tsunami affected the diving.
Posted by Steve at 4:39 PM 2 comments:

Frankly, this guy was taking chances. I'd have been out of there.
Posted by Steve at 11:45 AM 2 comments:

The main surge has supposedly passed, evacuation has been lifted on most of the Big Island except for north and south Kona...

This tsunami did cause some damage to a couple of areas. We were thinking about going to Splashers for dinner tonight, not sure if that'll happen. You'll see what I mean if you can get on facebook and look around for tsunami pictures. I've taken the liberty of forwarding some shots others have taken on my Wanna Dive Kona facebook page. The road damage is right by the pier in town between the pier and Splashers. There are other pics out there showing the area to be a bit flooded. It also looks as though the King Kam beach took a hit. Facebook has turned out to be one of the best sources of information on this event when it comes to finding damage, lots of the pure informational stuff (closures and openings) isn't necessarily accurate though according to the radio I was listening to earlier.

They've got crews in assessing damage and cleaning up road debris on Alii Drive. Hopefully it'll all be clear at some point today. Apparently 2 homes in the Keauhou area were showing damage according to the radio, and 3 homes surrounding Manini beach, down the road from my house, were obliterated by a surge that happened around 5 or 6am. I heard through the grapevine that the surge was pushing 15 feet high down around Manini beach. Napo'opo'o road is closed down by the coffee company about two thirds the way down at this point.

The main highway into town was packed this morning at 8 (I was coming back from spending the night at the shop) with people waiting for the evacuation order to be lifted.

Moved the boat, hanging out at the shop for the duration...

I made it down to the harbor at a few minutes after 11. All of the gas stations on the way in and out of town are quite busy. The harbor wasn't busy when I arrived, but by 11:15 it was getting real busy, with lots of trucks pulling in as I left.

They're predicting a 2 meter rise in sea level here in the Kailua-Kona area, which makes keeping your boat in the boat park kind of dicey. The shop is about a half mile inland and a bit uphill, maybe 40-50 foot elevation, and is out of the predicted tsunami inundation zone.

I'll probably move things further uphill about 2 o'clock. They just announced the latest predicted time to be around 3:45 to 3:50am.
Posted by Steve at 11:48 PM 1 comment:

Heading off to the harbor to take the boat to higher ground...

I'll probably take me about 35-40 minutes to move the boat. I may check in from the shop to tell you about activity in town.

It's 9:45pm and the Hawaii tsunami watch has become an alert...

The television is reporting that the Pacific Tsunami Center is saying the tsunami alarms will be going off at 9:59pm. Apparently they want to make sure people turn on the news at 10 (Hawaii tv hours are typically the same as central time).

The news reports they expect the hotels to be moving thier patrons upstairs in Waikiki if it looks as though a tsunami is coming rather than trying to evacuate the area.
Posted by Steve at 9:44 PM No comments:

Apparently there's a tsunami watch after a very strong earthquake in Japan earlier this evening. I'd been watching a pay per view movie and heard via family on the mainland. I'll be watching the news this evening, I may need to drive down to the harbor and move the boat.

Steve
Posted by Steve at 9:09 PM No comments: 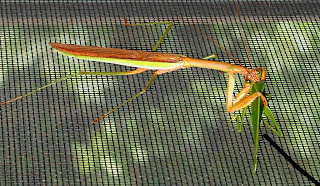 I'm down at the dive shop today. It's just about ready to open, I need to pick an official "open" date to start manning it full time. We've got a couple things to do that are easier done before we're open, and Bob gets back from Thailand this week, so it'll probably be between the 10th and the 15th. We'll finish everything up working around charters this week.

So one of the things about Hawaii, it's kind of buggy. Lately we've been getting these little green grasshoppers showing up at the house. They're kind of annoying, they like TVs, computer screens, and occasionally faces, which can be irritating when you're trying to sleep. Last night Pat had a praying mantis show up in her office, today while she was doing something on the computer one of the grasshoppers showed up and the mantis sprang into action.... that's one happy mantis.
Posted by Steve at 4:24 PM 3 comments:

February was kind of wierd. The first 8 days or so were terrifically busy, double charters, am charters and pm teaching... ect... Then it was about 5-6 days of miserably sick, with pretty much the same thing I had back in late November/early December, followed by two weeks of caughing and lack of motivation. I'm just now getting to where I can clear my ears most of the time. We've been running some charters, I hate it when it's slow, but it happened at the right time. Starting this weekend we're off to the races with spring break hitting.

Today is pricing day at the shop. Stickers are going on everything I've brought in the last couple of months. I may be hiring one more person in the next week or so, still gotta interview some people that responded to my ad that I put off because I couldn't even hold a conversation without going into a hacking fit. Sometime very soon the shop will be open 9-6 daily. I'll be making up for my lack of posting bigtime once we're open.

Steve
Posted by Steve at 1:17 PM No comments: