Here's a cell phone panorama photo I took from Splasher's Grill this morning in Kona.

You'll need to click on the picture to see the panoramic version....

Splasher's is quickly becoming Pat and my favorite eating spot. We'd heard they have a good breakfast and tried it. Kona doesn't have a lot of good breakfast spots and this one's right up there. Today I had the carne asada and eggs special, Pat had the eggs benedict on crabcakes that's a regular menu item (she considers that particular item to be one of the best breakfasts she's ever had, I may try it next time).

It was a gorgeous day today, as you may be able to tell by the photo from my cell phone. We had no charter today so Pat and I headed down to the office/shop to continue attempting to get it together... we're getting real close. Soon I should be able to meet customers the morning before their first charters, or in the afternoon a day or more before their first charters, to size up gear and get paperwork done. I'm getting tired of working out of my pickup truck. It'll be a clean and comfortable spot for the initial meet and greets. A couple more good days of work on the shop and I'll be able to move my boat rental gear out of the garage.

Tomorrow I've got another charter, I'm hoping the beautiful weather will stick around for a while.
Posted by Steve at 8:47 PM 1 comment:

We went to Garden Eel Cove for the morning dive today and there were dolphins in the bay. During the dive the dolphins were all over the place and visited our divers numerous times. Cathy had her camera in hand, I had to snap a shot of the back of her camera with my cell phone... tons of dolphins in this shot. They were all around our divers... I'm counting 22 in just the photo. By the sounds of it, it was one of our better dolphin shows on any charter I've worked in the 10 years I've been doing this. I'll try to get the actual image from Cathy at some point and post it...it's a VERY clear image.

On the way to our second dive site we were treated to an extra special happening - pilot whales around the boat. They were only about a half mile offshore, usually they're much further out. Sorry no pics. Great mammal day all around. 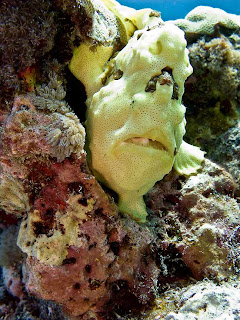 Pat joined us on the boat yesterday and had a blast diving.... frogfish, dolphins underwater, eagle rays and turtles, a huge snowflake eel hunting with a grouper - all kinds of neat stuff. I've been recovering from the darned cold, staying out of the water and Captaining the boat 'til I stop draining, but Pat had her camera along and got this shot of the frogfish.

Water conditions have been exceptional the last couple of days. We had 150'+ viz today on the dives.
Posted by Steve at 9:43 PM 2 comments: 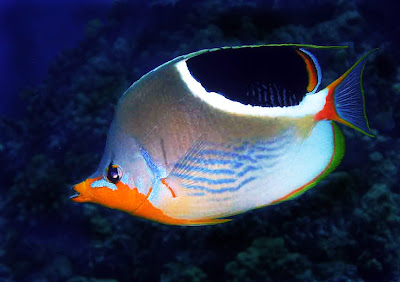 Canon has announced the release of the new Canon G11. I've been using a G9 for a couple of years now and love it, but the housing's getting a bit beat up and occasionally the buttons stick and lock up the camera at depth... so the obvious cheap solution is to shop for a new/used housing... but man, I'm really wanting to get into an Olympus or Panasonic micro four thirds camera and housing some time in the next year as the line develops and the new models come out (but we're talking some $$ though, and I've got more than enough other things I need to spend it on for a while already). Now Canon announces the new G11... a few less megapixels than the G9, but an improved sensor and processor for less noise and improved low light performance... hmmm, might be more affordable sooner in my case... hmmm....

Summer vacations seem to be ending, we're still going out nearly every day but the numbers on the boat are down. We're actually in the prime season for diving Kona for the next couple of months - I figure August through October/mid-November seems to have the warmest water and best consistent viz in general. I was planning taking a large chunk of October off this year, now I'm hoping to take a weekend off maybe. The shop/office is going to take precedence over any travel at this point. We are looking at a trip to Denver late May where Pat will do the walk and receive her Doctorate degree (she's a long distance Colorado Buffalo) and a chance to have some Rocky mountain oysters at the Buckhorn Exchange.

The weather's been nice, but a little humid/muggy the last few days. Yesterday morning the water was super flat, I could see the reflection of the cruise ship in Kailua Bay off the ocean as I drove into town. We've been having some real nice diving the last little bit. Tonight we head out for an afternoon and evening manta ray trip. I don't usually run them on Thursdays, but we didn't have any scheduled for my regular days this week and I had customers that could do it tonight so we're going.

Now you're probably thinking to yourself "gee, it seems to me that it was only three years ago I saw a picture just like this on the blog". Yup, it's a repeat, but slightly altered. Yesterday I was looking through some old stuff thinking about finding something for a window in the shop and I saw this Saddleback Butterflyfish photo. I wondered what it'd look like if I could brighten it up a hair, so I turned up the brightness a hair, turned up the contrast a hair, and burned in the background. Now I'm trying to imagine if it'd show up from the highway if I blew it up to 3'X4' and trimmed off the background and stuck it on the shop windows. I've got 2 8'X8' windows that need something, fish photos might be in order, it's a thought anyways.

Email ThisBlogThis!Share to TwitterShare to FacebookShare to Pinterest
Labels: butterflyfish 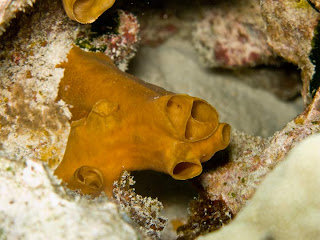 We rarely have hurricane weather in Kona when hurricanes pass the Big Island. We managed to get some weird winds and one evening with 3 inches of rain when it passed to the north, but looking at the weather radar it didn't seem to be directly from the storm. Anyways, other than having to tuck around corners to stay out of the wind it didn't affect the diving as far as viz and such.

We've still been quite busy. On the 13th I was looking at the calendar and thinking the next day would be one of the last charters for the month, then the phone started to ring and I'm looking at maybe 2-3 days off the rest of the month if I get no more phone calls... I'm hoping for calls to fill in empty spots, got an office to fill up.

I haven't been working in the "office" much lately, I had two days off a week ago that I thought I'd be able to get in, but spent it sleeping off a heavy cold. I'm cutting up palmwood trim to cover that white stripe in the middle of the walls from a picture a few posts back - looks real sharp, hopefully it'll be all up this weekend. I'm hoping to get the place ready to occupy by the first week of September.

The photo above is of a sponge we see here from time to time, I think it's the vagabond boring sponge. We don't have the big colorful sponges you see in some parts of the world, mostly small stuff, but it's still interesting to those who like unusual stuff. 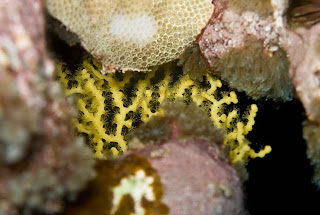 We've got our first hurricane
"threat" of the season going on right now. Hurricane Felicia made it to a category 4 hurricane a day or two back, was down to a category 2 by last night or this morning and will likely be a good sized rain cloud by the time it reaches Hawaii. I think they're predicting it to be a tropical depression. Sounds like larger surf on the east side of the island is likely on Sunday. We'll see if anything comes of it on our side of the island when it passes. In years past that I've lived here, "hurricane days" have been gorgeous and good days for diving.

I've got a couple days off after tonight's dive, and I don't expect a whole lot of phone calls 'til this thing passes. I may go shorediving Monday morning to take some pictures if the water's flat. I'm running low on unposted photos, haven't carried the camera on dives in some time, so a day on my own might be fun.

Here's something you don't see a whole lot of in Hawaii... the photo above is of a gorgonian in a hole in the coral. This one's bright yellow, we also see red, white or pink from time to time. Hawaii has reefs that are largely hard corals, and we have little in the way of soft corals, large sponges or gorgonians, but we do have small amounts of the soft stuff.

Email ThisBlogThis!Share to TwitterShare to FacebookShare to Pinterest
Labels: hurricane 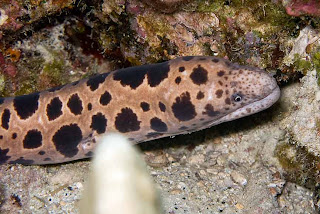 Odd title, but we've had newlywed couples on the last couple of days... must be a lot of late summer weddings.

We've had a pretty good south swell for it seems like forever, but we've been able to tuck in around corners and the viz where the swells aren't pounding has been fantastic. About a week and a half ago it was real heavy and we spent several days that we didn't have repeat customers up at Garden Eel Cove off the aiport... had viz in the 200' range - wow!

It's been pretty muggy the last two weeks, we've broke down and turned on the AC in our bedroom at night, we rarely do that for that long as the electrical rate here is outlandish.

Here's a shot of a Tiger Moray (Scuticaria tigrina). We don't see these fish's heads all that often, see their body through the coral heads from time to time.

Heading to bed... got morning and afternoon/evening charters tomorrow, so I'll be working from 8am to about 11pm or so.

Steve
Posted by Steve at 9:55 PM No comments:

Fun with lazers. from Steve on Vimeo.

OK, I shouldn't have done this, but my wife has a lazer pointer and I couldn't help myself.
Posted by Steve at 6:21 PM 2 comments: