Fabulous day on the water today, lots of whale action... 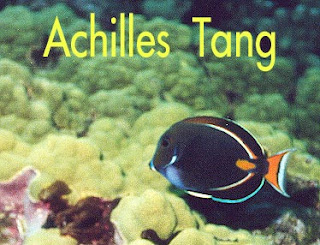 You couldn't ask for a nicer morning in Kona this morning. It was bright and sunny and the ocean was FLAT. We did our first dive at Golden Arches with our afternoon dive at Kaloko Canyons (some call it arches or just plain Kaloko also). We did have a west swell bump up for the second dive, but it didn't affect the diving.

I stayed up top on the boat all day. The other day I was getting to a store for a single 1.5 inch bolt at closing time and they closed the front door just as I hit the parking lot... stupid me decided to make a run for it and got about 6 steps before I felt a pop, sort of like an electrical shock or someone kicking your calf, in my calf. I hopped to the door and at least they let me in to spend my 26 cents. I didn't have blood pooling up in my foot and the pain is going away more every day so it's not a major tear, but I won't be diving 'til it heals enough that I don't have to worry about cramping up while leading a dive. I'm hoping to be back at it next week, in the meanwhile Bob gets to do all the diving (he likes it that way anyway).

While I was on the boat there were whales passing both dive sites. My divers weren't in the right spot at Golden Arches to see them, but whales passed right next to the dive site on two occasions. The Kaloko whales were more like a hundred yards out from the dropoff.

The photo above is one of my early pictures of an Achilles Tang (Acanthurus achilles). I'm running out of newer pictures I like, so I'll be going through some of my older pics taken with a Sea and Sea MX10. Most of them will have the fish ID on the photo, so you'll be able to tell the older stuff from the newer stuff.

Steve
Posted by Steve at 7:14 PM No comments:

Taxis, shuttles, the bus and rental cars.... getting around in Kona. 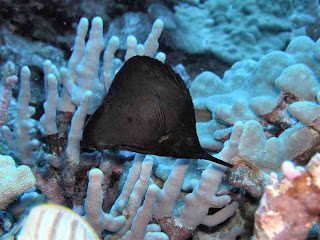 I've probably already posted this picture a long time ago, it's of a black phase long nose butterfly. While long nose butterflyfish are found in most of the indo-pacific, Hawaii has two species, one of which is endemic (lives here only) and has a longer nose. Occasionally you will see a black phase, which is considered very rare, in Hawaii, mostly in Kona. We do have spots where you can see several of them on a single dive.

Back to the topic of the title... gettting around in Kona: I've always recommended getting a rental car when you come here, but there are many people who do want other options, so I'll discuss them here. First thing one needs to know when coming to Kona is - there is no walking to anywhere from the airport. I had someone asking me how long of a walk is it to the Fairmont Orchid from the Aloha terminal last week, and while I'm not exactly sure, it's something in the range of 27-34 miles or so (a longer distance than most people want to roll their luggage). The Kona airport is roughly 6-7 miles from anywhere, out in the middle of a 200 some odd year old lava field. Kailua is 6 miles away to the south, the nearest resort is roughly 7 miles to the north, and most are quite a bit further.

The second thing you should know is, there is essentially no public transportation system as known on the mainland. While there is a bus that circles the island daily, and a bus that services part of Kailua and south Kona a couple times daily, there is no readily available bus system to hop onto.

That basically leaves you with two other options for getting to your hotel (the hotels here don't have specific shuttles, but I suspect if you throw enough $$ their way they might arrange for private transportation) when coming to Kona and determined not to rent a car - Taxis and Speedishuttle. Just a note, in many cases, a day's car rental will be less than a taxi or shuttle ride. Taxis are readily available at the airport upon arrival, and if you are wanting to get somewhere immediately, this may be the quickest method. Speedishuttle is a company I didn't even know existed until 3 weeks ago when I decided to pick up a part time evening job, apparently they've been operating here for years with 4 or so shuttles servicing the west side so they weren't highly visible, but they are increasing their fleet size so you see more of them at the airport now.... OK, gotta tell you, I'm working for them now as a greeter at the airport a few evenings a week, so I guess this is a plug for my employer, but they are a legitimate option for getting around. Anyway, the shuttle does service all the major resorts, is usually a bit cheaper than the taxis generally and can carry a bunch of luggage without a per piece charge. One hint though, see if there's a greeter for them outside the luggage carousel when you arrive and arrange for the shuttle before you wait for your luggage - you will wait for your luggage in Kona, as this is a small airport and you can walk to the carousel in roughly 60 seconds - that way a shuttle is very likely to be waiting or on it's way when you do get your luggage. Shuttle service is generally not a long multi-stop thing here as it is in bigger tourist areas, it's still sort of a fledgeling industry here in comparison to Orlando or Vegas or major cities, you very well may have the shuttle to yourself or one to two other groups from what I've seen. Both taxis and shuttles are not inexpensive, as there's generally a fair amount of distance to be covered to get anywhere from the airport, but they can be handy for someone who wants to stick to the resort areas or Kailua.

If you do get a rental car, don't be overly concerned about getting lost. I get questioned about how difficult it is to find your way around Kona on occasion. Kona essentially has only one north/south highway and Kailua has maybe 2-3 north/south streets with a limited number of cross streets. It's small. There were only 6 or so stop lights on the entire west side of the island when I moved here just 8 years ago, and now maybe up in the teens... it's not an elaborate road system.

I hope this helps some. For those wanting specific locations check out the online mapping services, and then keep in mind they arent' necessarily accurate or complete, Mapquest used to be about a mile off on our street address, showing a completely different subdivision. 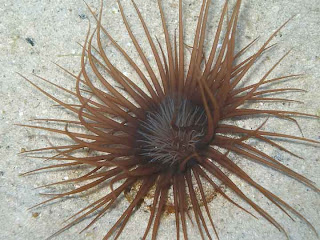 Stupid title, but I just noticed I've never really put the word "blog" in a title in my blog and I get lousy position results when doing a google for "hawaii blog" and such... just thought I'd see if titles mean anything to search engines.

So this is a Cerianthus tube anemone. We don't see them all that often. I found this one about 120 feet out in the sand, and I've talked to a tech diver who said they're usually found at 150'+, which is beyond the standard recreational depth of 130' and shallower. We used to keep them in aquariums and they were fairly hardy, but they can take up a lot of space in the tank, clownfish generally won't go into them, and they are kind of nasty... I had a customer who said her's was actively hunting and eating her fish and I hadn't see that before so I went for a visit and saw it first hand. When a fish went near you could see the tentacles all move in the direction of the fish. There was no need to make contact, the tentacles would all sway towards any movement. Apparently they are fairly predatory for an anemone.

On my previous post I did not name the fish. It was an Oval Butterflyfish (Chaetondon lunalatus). These fish are one of Bob's favorites.

Email ThisBlogThis!Share to TwitterShare to FacebookShare to Pinterest
Labels: anemone 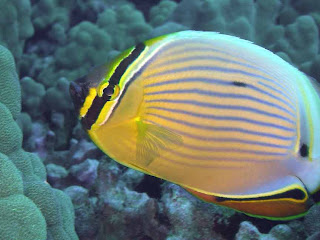 So I just ran across this. It's apparently a live feed from a sono bouy up in Puako. When I listened, the whales were singing away like mad - I almost wonder if it's a tape as I've never heard anything that busy diving.

The live audio on the page takes a while to load, so be patient, it's worth it if they're still singing like mad.

Email ThisBlogThis!Share to TwitterShare to FacebookShare to Pinterest
Labels: whales

This is by no means a great video, but I've spent some time trying to get a decent still photo of a Flame Angel (Centropyge loriculus) and had little luck. They tend to dart and dive into the coral anytime you get near them. As it was, I had to stay about 6 feet away from this little fish and zoom in, which makes for a shakier video as any shake is magnified when zoomed in. At least it gives an idea of what the fish looks like.

I had the day off today from both jobs (yep, I've taken on another part time job that'll work around my schedule during the busy times) I found this one at the Place of Refuge this morning at about 65 feet, I was trying to get a shot of a pair of Potter's angls and this thing popped out in the middle of them. Other highlights of the dive were a manta, several eels, the turtle cleaning station and such.

Water conditions were excellent at 10:30 am this moring, with a slight swell starting to pick up towards the end of the dive. Current Kona water temperature?? Brrrr... I had a reading of 73 pop up on my computer during part of the dive, otherwise 75.

Steve
Posted by Steve at 3:10 PM No comments: 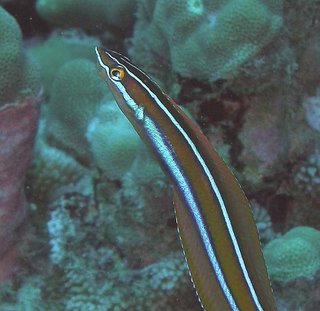 I managed to capture a decent shot of one of these fish the other week. They're tough to get a good shot of because they are free swimming and dart around. When frightened they'll dive down and back into a hole, sometimes you can get a shot of their head while looking out of a worm hole or sponge.

The Ewa Fang Blenny (Plagiotremus ewaensis) is one of the blennies that seems to mimic the cleaner wrasses. The have similar coloration as the juvenile Hawaiian Cleaner Wrasse (Labroides phthirophagus) and swim in the same fish enticing motion as the cleaner wrasses, however when a larger fish presents itself for a cleaning, they take a bite of scale, gill, skin or mucus. The fish don't seem to like that. I did see a Parrotfish chase one about 30 feet one time after the blenny took a nip of it's gill.

We've had some cold clear nights here lately. It managed to get down into the upper 50's a couple of times at our place. The surf is finally down... big surf for a whole week this time, that's not common. I feel sorry for anyone coming over specifically to dive this last week. Most everyone cancelled all week, and I personally wouldn't have wanted to dive Monday through Friday of this week. I had a buddy who dove Sunday of last week, before it got bad, who said they had fairly heavy surge at 80' that day. They're expecting surf again later this week, but not as big as the last go around.