...OK, I'd only eaten there once back in the day when it was out in the Kaloko warehouse district, but it was interesting. A friend of mine said I needed to go there for breakfast (same guy that recommended the double meat hot pastrami at Bianelli's the other month). I went there and it was really pretty good, a bit unusual by mainland standards (this was back in '99 when I was still relatively new to the island) as it was a plate lunch place. I had some kind of stew filled omlette if I recall correctly, quite tasty. The only reason I never went back was because I live way south, and I don't do breakfast or plate lunch all that often. At any rate, they closed their Kaloko restaurant several years ago.

Sam's an accomplished chef and has gained a bit of celebrity over the years, came out with some cook books, I think he's had a cooking show or two, was picked to design the food for an airline's in-flight meals, etc. Along the way he'd openend a restaurant in Honolulu that I hear good comments about. I believe all of the plate lunch places are closed and his new Sam Choy's Kona restaurant looks as though it will be more upscale.

It's moving into the old Wendy's Keauhou location. It was a Wendy's for years, but closed down several years ago. It arguably had one of the best views of any restaurant on the west side of the Big Island (others being the Coffee Shack Deli down in Captain Cook, and a couple of oceanside places). It's a prime location and there was lots of speculation/hopes over the years that some place nice would come in. Apparently this new venture has been in the works for quite some time, a couple of years maybe, but it's just started to really get up to speed in the last few months. They've expanded the old building and enclosed the patio. I thought I saw some type of sattelite dish on the roof, so they probably are putting in a bar section if I guess right (edit a half day later: Duh, if I'd actually looked through the website I'd linked earlier I'd have noticed the mention of the bar).

Kona's ripe for another nice restaurant to come in. Sam Choy the person is kind of a local institution, everyone knows who is. Hopefully it'll be another nice place to try after a great day of scuba diving in Kona Hawaii. I'm looking forward to it's opening.

I'm in the shop today. I thought I'd play with Photoshop CS5 a little bit and try a panorama. It worked. This is 6 photos stitched together in photoshop. I haven't scrutinized it yet, just looked at it in small, but it seems to do a better job than the last time I tried a panorama in a much earlier version of photoshop. On the blog, you may have to click on the image to get it to full size and get a decent view. I'm not sure what'll happen on my Wanna Dive Kona facebook feed, hopefully it'll act like the typical photos and be clickable, video doesn't seem to play well.

Now I gotta try it in RAW and see if photoshop will merge RAW files and keep them in RAW, or If I have to edit them to jpeg and hope I got the white balance the same on each photo file edit... Underwater panoramas might be interesting to try. One of these days that I take a day off it might be fun to take a tank down to the reef and give it a try.

Anyways, you can kind of get an idea of what I'm putting together at the dive shop.

It's gorgeous in Kona, both topside and in the water, right now... 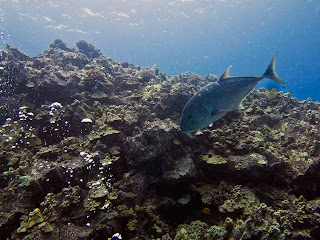 I'm in the dive shop for the day right now. We went out for the manta dive last night and got skunked for one of the few times this year. There was a manta around when snorkelers were first put in, but it took off, so none, or very few, of the divers got to see it as far as I know. It turned into a night dive for everone.

Business has been pretty steady throughout the summer, although right now I've got a 7 day mystery stretch of no charters for some reason. Starting the 19th, which is about when I suspected it to slow down, I've got charters lined up through the next 3 weeks or so, with plenty of other charters through the rest of September at this point.

So diving has been really nice the last little bit. We did see about a degree temperature bump in the last week, so the water's seemingly warming up. We've had some minimal swell, not enough to really affect anything. We're into the start of my favorite time of year to dive Kona. Late summer and fall are really great times to dive here... warmest and calmest water conditions usually, and once school's start up it typically isn't quite as busy for the resorts.

We were diving the other day out at Kaloko, and one of our customers was taking the Advanced Open Water course and used my camera for the photography dive, he managed to get several decent shots. Here's a shot of a pretty good sized ulua (aka trevally) he shot a picture of that was following our divers through the canyons for a while. The picture really doesn't do justice for the size of this fish, everyone diving said it was in the 36 inch long range.


I had the morning off, kind of a lucky thing as there was an accident last night in Kealakekua that knocked over a telephone pole and the drive into town is taking forever. I took the liberty to drive a bit down the road to Ho'okena Beach Park for a bit of snorkeling, figured I'd try the camera.

I shot about 8 minutes of video while I in just for the heck of it. It's not spectacular, but it'll give you an idea of what the place is like. The color is much nicer through eyeballs, the video doesn't do it justice. I shot this video starting about 30 feet off the beach in 30 inches of water then swam to the right around the old pier. There's lots to look at right in close there.

Ho'okena is a small beach park in south Kona. It's got fairly nice facilities, camping by permit, some concessions run by a non-profit, and even handicap access to the facilities. The parking lot is sand, so be careful where you park it, AWD or 4WD might be handy if you're not watching where the tires are.

The beach is exposed to high surf in the stormy months, so the reef isn't as nice as some other places, but there's still lots of fish so there's plenty of decent snorkeling. There's some pretty nice shorediving there as well, but you'll probably need to do several dives there 'til you figure it out. My first shore dive there with my wife, Pat, was kind of lame. I decided to continue to explore it and found some pretty interesting diving over time.

I'm headed into the dive shop shortly. We have a manta dive going out with a couple of divers and snorkelers tonight. 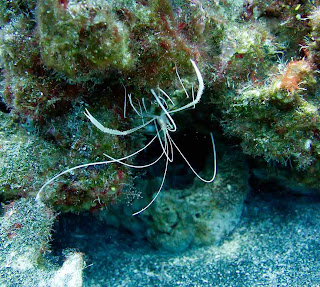 Finally, I've got Adobe CS5 on my computer at the shop, and after an update download my camera I bought last year has RAW support... this means, maybe I'll start taking my camera back in the water. I realized the other day that after a year without the camera in the water, I forgot how it works. I didn't even have the zoom/focus ring in the housing so I was pretty much stuck with wide angle, couldn't remember how to change the camera into macro, all sorts of photo mishaps ensued. I did manage to get this ghost shrimp photo though. It was down at 92 feet and this was taken without any type of flash and no zoom control. If you'd see the original photo, it'd be very blue and lacking in detail or color, the nice thing with RAW and underwater photography is that you can set the white balance after the fact and there's a real decent chance in getting the orginal colors back.

Ghost shrimp are also known as Fountain Shrimp in many parts of the world, named after the foutainous spray of their antennae I guess. They're a pretty decent sized reef shrimp, not eatin' size, but big compared to what we usually see.

We've had a pretty good south swell lately, with a fair amount of west in it on occasion. South we can deal with, west can be a problem if it's big enough. From the dive shop I can see things are kind of washed out near Honokohau Harbor (yesterday they were just fine). Tomorrow we have 3 intro divers and a couple of certified divers on the boat, hopefully it'll settle down by then. One of the very nice things about Kona diving is that because of the lack of soil at water's edge, it can be stirred up one day and cleared up the next if the surf settles down. Sand, the limited amount that there is on the reefs here, settles out very fast and we can have 100+ foot viz the day after having poor viz.

Yesterday's diving gave me the first 79 degree reading for an entire dive that I've had this year. Things are finally starting to warm up. It never got "cold" here (by our standards) this winter, but it has yet to really start getting warmer either. Last year it maxed out at about 79 degrees, I'm hoping we see 80/82 later this summer and into the fall. The warmer water temperatures often will hold out through November and early December.
Posted by Steve at 1:46 PM No comments:

Hanging out at Garden Eel Cove in Kona...


I hadn't had the camera underwater in ages and thought I'd do a short Captain's dive between dives up at Garden Eel Cove. We've had a pretty good south swell the last little bit, and this day it was huge and the bay off the airport and right outside the harbor were the best bets that day, we were training students so we opted for good conditions and did both dives up north off the airport.

Garden Eel Cove is a very good example of Hawaiian hard coral reef. It was protected by Keahole point back when Hurricane Iniki came through a decade or so ago and it still has lots of old growth coral. You can see all the hard corals on the dropoff in the video. Unfortunately the video doesn't do it justice... largely blue, when you're actually diving it you get to see all of the browns and golds of the corals and the color of the fish.