Here's a shot of some spinner dolphins right outside of Honokohau Harbor. Several days a week we might see a resident pod that hangs out in front of the harbor and a few other spots. When they are in, you have a fair chance of seeing them on nearby divesites... way cool!!!
Posted by Steve at 8:50 PM 4 comments: 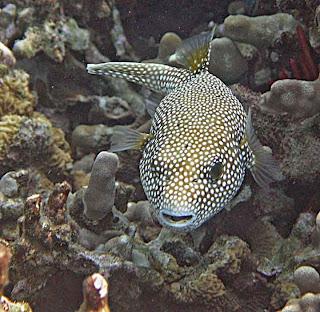 OK, so I can't get enough of the puffer that Cathy took photos of yesterday. Here's the regular coloration of the spotted puffers we see, it's from a photo I took about 3 years back. Quite a contrast from the yellow colored one for sure. The shot below is another pic that Cathy took as the puffer from yesterday was just inside the mouth of a cave/puka (puka is essentially Hawaiian for "hole").

Apparently the yellow coloration is more common in other parts of the Indo-Pacific, but for Hawaii it's a pretty unusual sighting. 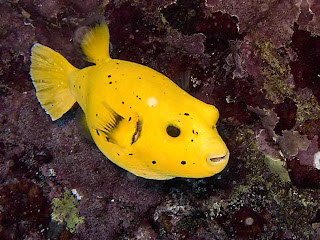 It was definitely the highlight of yesterdays outing, even though they saw a Great Barracuda, a frogfish, a couple of eagle rays, a couple groups of psychedelic wrasses, an octopus and other cool stuff.
Posted by Steve at 2:21 PM 8 comments:

Holy Cow!!!! Cathy came up from one of today's dives very excited....

We had a group on board today of mixed snorkelers and divers and hit a couple of spots where we can do both. When Cathy came up she was thrilled to see a fish she hadn't seen ever before in the time she's worked the dive boats in Kona (since '76, 32 years and seeing something new is still a thrill). Before she climbed back on board she asked if I happened to have my camera on board and if she could borrow it to take some photos.... yup. While she was down one of the snorkelers said they'd seen it under the boat and thought it was pretty cool, but didn't know it was anything out of the ordinary... 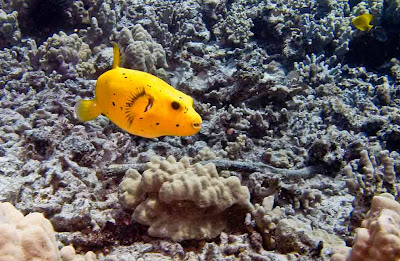 After looking it up in Hoover, it turns out this is a rarely seen color morph of the Spotted Puffer (Arothron meleagris). Man, I hope it's still around when I'm back in the water in a week or two. Photo by Cathy.

It's whale season in Hawaii... 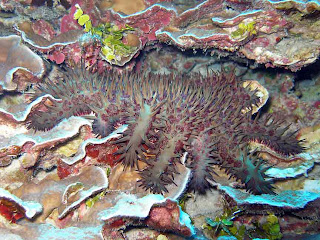 Between dives on yesterday's charter we were treated to a momma whale and her calf on the surface. The youngster was breaching, quite cool as it was probably in the 10-13 feet in length range by my wild guess. Anyway, that got me to thinking I ought to repost a link I posted last year - here it is... Live audio feed from a sonobuoy system up in Puako - click on the link and you can hear the whales off Puako, which is up north of Kona in South Kohala.

The pic above is of a Crown of Thorns Starfish. You don't want to touch the spines on these guys as they're sharp enough to go through gloves and pack a nasty toxin that can be very painfull and will leave you a reminder in scar tissue for a few years. Crown of thorns stars are coral feeders so you'll occasionally see white patches on the coral that lead a trail to them. They're generally considered to be a pest, and in some parts of the world have caused severe damage to reefs when there's a bloom of them. In Hawaii, their only real predator is the triton's trumpet snail.. one good reason not to collect the trumpet snails, which are relatively few and far between.

Sometimes, when you are checking out the underwater world..... 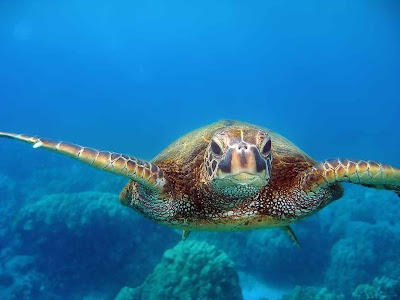