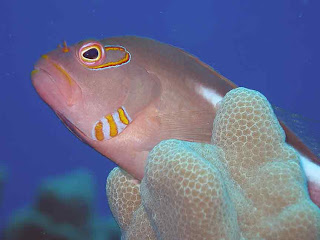 This Arc-Eye Hawkfish is probably one of the last pics I took with my Olympus sp350 before the flash went out. One of these days I may send it back in for repair as it's a pretty darned good camera still even without the flash, but for now I have a different plan... yup, I ordered a new point and shoot camera and housing, thank goodness for 6 month free financing programs some companies offer. More about the new camera later when it shows up.

The boat is really coming along, when I went by today at 3:30 they were wiring in the last of the deck lights and the red over white over red restricted maneuverability lights (they're sort of the night time version of a dive flag). The engines appeared ready to go, but they hadn't installed Raycor filters (oversized fuel filters with water separators) just yet and I told them I had to have them on the boat. It may be done already, I can't wait to get tomorrow's charter off and see if it's ready to start breaking in the engines as I need to get a couple days of running time in before I charter it.

We had some good dives today. I'd actually been out of the water for quite a while, between running around getting nowhere with the boat, renting another boat that had it's own Captain, the mainland trip and a prolonged lung bug, so it was good to get back in the water. Someone turned me onto the possibility of Hawaiian Flame Wrasses at a particular dive site and I was able to find a few. They do not look as spectacular underwater in natural lighting as they do in pictures due to lack of light (at depth, reds seem to be the first color to go - just cut yourself at about 90 feet and you'll see green blood come out) , hopefully I can get a few good shots in with the new camera at some point.

That's it for now,

Steve
Posted by Steve at 8:31 PM No comments:

I've been thinking about cameras lately since mine have been on the fritz.

Many of the popular cameras actually have underwater housings available and Pat and I have housed several digital cameras over the last few years. The onboard flash on most of them has it's limits and many people look for extra light by adding an external flash. Last year I picked up an Olympus flash and it's appropriate housing for my Olympus SP 350 set up, but it was so bulky I never really used it.

The other day I was checking things out and found this new offering by Olympus...
Olympus UFL 1 - Underwater flash - 14 (m)

It's a stand alone underwater flash that is compatible with many of the Olympus underwater camera housings that have a hot shoe, offering TTL exposure without the hassle of wires and strobe trays. I wish they had it back when I was looking. This Amazon price is actually a very good deal, as a housed Olympus flash will cost much more, and trying to get TTL exposure with another brand of flash will run you some serious dollars and effort.

I'll leave you with a sunset photo from quite a while ago. I may have posted it a couple years back, but it may have been a vertical shot rather than horizontal. 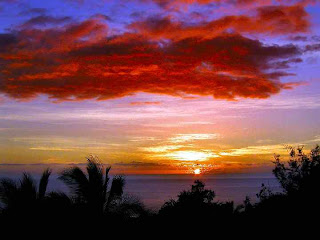 Steve
Posted by Steve at 9:50 PM No comments:

My wife had pretty much tamed the male day gecko (it would eat from her hand) that hung out with it's conterpart, Wilma, on the espresso maker in the kitchen. We hadn't seen Fred in a couple of days and cleaned out the fridge and found him in the back of it. There's been another male hanging out trying to horn in on Fred's action, so I guess this is his chance, he'd been run off with major head bobbing, body leaning and tongue sticking out threats 'til now. Here's a link to a pic of Fred before the permafrost incident. 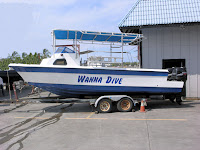 So barring any further missing pieces.... I finally have a pretty good idea of when I get the boat back. Whoohoo!!! The paint job is basically done, I'll be enameling the cabin interior after all the wiring is done. The engines have been mounted in place for weeks, but now the throttle and shifting and steering cables are in place, the new ladder's up, the GPS is in, they were hooking up the running lights and stereo when I was by earlier. After that it's just the fuel and power, a couple more things I need (courtesy lights, red/white/red restricted maneuverability lights, macerator pump for the fish hold and a couple other items) and it's ready to go to sea trial. I suspect I'll get it Thursday and then I can take it out for a couple days to break in the engines and do some other stuff I need to get it ready for charter. Finally... I didn't believe them when they said "three weeks" but I never figured it'd be almost 5 months.

The weather's been pretty nice lately. We had some nice cool mornings this week as though winter is coming, but it's kind of muggy this evening. Just another typical fall day here.

Steve
Posted by Steve at 9:59 PM No comments:

Back from the mainland.... 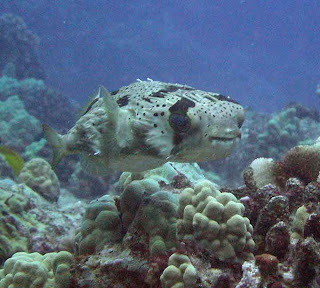 I just returned from the mainland. All I can say is Brrrr it's cold compared to here, at least in Oregon, especially the last week or so. I hadn't planned to go anywhere this fall, but I had a break in the charters and thought it'd be a good idea to visit my family and my wife (she's in Oregon for 6 weeks doing a practical portion of her doctorate she's been working on) while I had the opportunity. I hadn't been back in several years so it was about time.

What does one do when they go to Oregon from Hawaii... I can basically answer that by saying "I'm full of burritos". Boy do they have mexican food there these days, and boy do I need to back on my diet - I'm heavier than I've been in about 4 years, still not up to what I' have been, but it's time to turn it around. I'm not sure if I made I through a single day without some type of mexican food. I did get to see a monumental 4th quarter implosion at the OSU - UCLA football game, nothing like going from 2 points up to 30 points down in about 7 minutes. Yuck, we'll get 'em next year! Well, besides the good eats, I did get a chance to drive around and see some of the changes of the last 5-9 years. It was a relatively quick trip and if I was there for an extended time there'd be plenty do do beyond eating and football.

Now that I'm back, I'm playing catch up with e-mail and everything else. I had a charter this morning and also checked on the status of the boat. It's primed and supposedly ready to spray. There was a kid wiping all the dust and rain out of it today. Hopefully they'll spray it today, elsewise it'll just get dusty and rainspotted again by tomorrow. I'd hoped it would be beyond that and to the mechanical stages. If they spray it today, they'd need to put down the non-skid and the final touches and it's ready to go to the mechanic.

This guy is a Longspine Porcupinefish (Diodon holocanthus) also called a spiny puffer or spiny ballonfish. They're tough to get a good face shot of, I had to sit way back and zoom in on it, so the shot's a bit grainy.