Shore diving Kona Hawaii...Some of the best shore diving in the State...


Kona has a number of very decent shore dives. Unlike the other islands in the chain, we're mostly a rocky shoreline and there are no rivers or streams on our side of the island. That makes for very good water clarity on most days.

This was an OK day, nothing special. My guess is I took this video maybe 70 feet from shore. The Place of Refuge is neat in that you can step off the entry rock and be in 6 feet of reef from the get-go. Yellow tangs are often literally eating at your fin tips as you step in. There's a good expanse of 9-30 foot deep reef out front and then it drops to deeper than recreational diving depths in just a short swim.

As much as I like running dive charters, there's good diving to be had for those who are in to shorediving.

the Big Island of Hawaii and live coral reef... lots of it here... 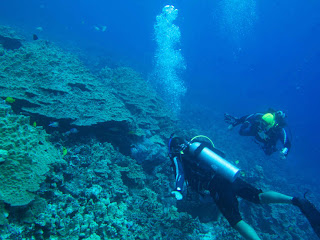 I was cruising the web and ran across this page I've linked before on NOAA's study of Hawaiian coral reefs. It reminded me of a story from this last fall.

We went to DEMA, the big dive industry show, in Orlando in November and my wife and I went to Miller's Alehouse, a bar/restaurant near where we were staying that impressed us favorably. While sitting at the counter waiting on food, Pat noticed a couple across the way and said "they're divers". I'm wondering how she figured that and she mentioned she could see the necklace the gal was wearing was one we sell out of the office, and the guy had a dive computer on his wrist... maybe Pat should be a cop, I apparently don't notice these things. We started up a conversation with them and by and by Pat says to the guy that he's familiar, we must have met before. I'm doubting it because they're from the east coast, then suddenly she says she thinks we talked to him on the monorail in Vegas on the way back from DEMA the year before. He said "that's quite possible".

Towards the end of the meal he mentioned he had 30 some odd dives in Hawaii, then said too bad Hawaii doesn't have any coral. Well, that's a hot button topic with me because it's simply not true. We've got no soft corals or sponges, but we've got loads of hard corals in Kona. He didn't believe me, but he'd never been to Kona yet, his diving was mostly Maui and some Oahu. Now I've been to both, and Maui has some decent corals in spots, but not like in Kona from my experience as well. Anyway, I disagreed with him and later realized he was definitely the guy from the monorail the year earlier because the exact same topic came up. I've now had two big Vegas monorail coincidences over the years (first one was spoken of on one of my very first posts in this blog, check the history if you're into a lot of reading) and I find it amazing that it can be such a small world at times.

So... if you think Hawaii doesn't have coral, or you think you've seen it all on trips to the other islands, you might want to come to Kona for a visit and check out what healthy Hawaiian hard coral reefs can look like. We've got several types of dive sites here, and most of the dive operators try to vary the dives, so over the course of a couple of days you should run across some of our nicer spots for coral structure. Hurricane Iniki did pull a number on much of the coastline a couple decades back, but there's still plenty of old growth coral to be had. Reef areas that were really trashed from the hurricane nearly 20 years back are starting to come back quite nicely - I wish I'd taken photos of the north side of Honaunau bay when I moved here, it looked like a boulder avalanche, now it's tough to see the boulders and there's an 8-10 inch coating of finger corals over the whole thing, and plate corals are starting to take up residence on that side of the bay as well... that was the one weak part of that bay as a dive spot, now everything's pretty much a tremendous dive.


I took this brief video on the 23rd of December. I think there were 14 mantas that evening. It's been running anywhere from 5 to up to 25 mantas a night pretty much since then. Hoppefully it'll keep up.

Yesterday we had a blast. I had a friend that wanted to take friends out for a whale/dolphin watch. We headed up north and ran into mantas on the surface at Garden Eel Cove, then a huge school of dolphins off Makalewena. After watching the dolphins we decided to head out to sea and look for whales, about a half mile out we ran into 6-7 false killer whales (possibly pigmy killers, I can't really tell them apart at this point) and continued out to sea because we could see some splashing in the distance. turned out there was the largest school of pacific bottlenose dolphins I've ever seen out there. Usually we see 2-6 in small groups, this was dozens spread out over a good sized area. There were humpbacks whales in the mix as well. After watching that for a while we headed in to Garden Eel Cove to watch dolphins again.

We've had some gorgeous skies lately. If you check out my facebook page I've got a shot or two of the skies I took with my cell phone, it's been gorgeous.

Steve
Posted by Steve at 7:48 AM No comments:

Do you suck air? How to improve your air consumption while scuba diving....

I thought I'd start the new year with a helpful hint. We often get people on the boat who are divers that get only 35-40 minutes a dive and always have. When that happens, we try to give them some hints on how to dive to get longer dives. A few months back we had a customer on the boat that commented "you're the first dive company we've been with that actually helped us stay down longer" or something to that effect. Apparently when the question of breathing came up, most dive crews they have had just said something along the lines of "dive more and it'll get better" and not given actual hints at how to change it right away.

So here we go... there's no guaranteeing this will improve your bottom time, but we've found that most divers can have a great deal of improvement over just a couple days time by working on these. I've had divers go from a history of 35 minute dives, to staying down 50-60 minutes or more just within a couple days of trying these "tricks".

- Slow down. Slow down your breathing (more on that later) and slow down your diving. People who zip around tend to burn up their air faster, tend to see less stuff, and actually tend to cover less ground because they're using up their air at a much faster rate than they would if they went at a relaxed pace.

- Don't swim with your arms. One, every time you swing your arms forward, it practically acts like a bellows to your lungs, making you take a breath. Two, for as much pull as you get using your arms to swim, you are creating almost as much resistance, so the net gain is negligible. Arm swimming is pretty much a new diver's problem, but I know I was guilty of it for quite a while in my early diving days. I finally got to where I wanted to stop it and I actually clasped my hands behind my back while diving to stop it. I'd already improved my bottom time at the time quite a bit, but when I started doing that, I just about immediately added 5-10 minutes to my bottom time. Every now and then a diver's likely to have to use their arms to make a turn, back up and such, and that's OK (although those that dive a lot can often find a way to kick that stops that need), but constant arm swimming really burns the air.

- Slow down your breathing!!! That one's the big one. As a boat captain, I watch a lot of bubbles. I can pretty much tell who's coming up first as soon as my divers are three feet underwater. There are divers who's bubbles are literally hitting the surface every second or two, then there are divers who's bubbles are hitting the surface every 7-8 seconds or longer. Guess which one's are going to be down for a long time.

From the get-go, you are told "deep and slow" when it comes to breathing on scuba. It really does work. Implementing it is another thing altogether. Diving is very exciting, and very foreign, at first. Breathing underwater isn't all that natural, and the tendency is to breath quite rapidly for a lot of people. Even once they get over the initial discomfort there's a tendency to breath somewhat shallow and rapidly for lots of divers.

There's a couple of tricks for breathing slow. Some instructors will say, pretend there a long straw down to the bottom of the tank and you want to slowly sip it as you inhale. That works for some people. I've heard others say that you should inhale for 7 seconds, then exhale for 7 seconds. That works for a lot of divers, but it's kind of tough for many to go from 1-2 seconds each direction immediately to 7 seconds each direction. An instructor once told me to count the duration of my inhale, then count the duration of my exhale (set a counting rhythm and then do it a few times while breathing in and out), then try to extend it by a second each direction for a few counts. He told me to not spend the entire dive counting, but just to check my breathing rhythm and then try to extend it by a second or so maybe every ten to fifteen minutes during the dive. Over the course of a couple dives I found myself lasting a lot longer.... this method worked the best for me.

Nowadays I pretty much ignore my breathing rate, but every now and then I'll have a customer who's a very good breather (it's embarrassing to be out breathed, but it does happen on occasion) and I'll have to slow down my breathing. I find that if I set a slow rate at the start of the dive as soon as I hit the bottom, I'll maintain that slow rate throughout the dive and last longer than if I wasn't paying attention to it at all.

Over the years I've seen divers go from "hoovers" to being able to last 75/85/90 minutes or more just on improvements in technique. Once they are there, they need to look for dive companies that actully allow those kinds of bottom times (we do unless deco status or other circumstances affecting dive length exist, hint hint) on their charters, but at least they can maximize their tanks even if the dive companies they are with have earlier cut off times.

Diving is one of those "sports" where even relatively out of shape divers can breath with the athletic ones once they find their rhythm. Good luck and happy diving!