Brrr it's getting cold... We've had some rain, so there might be some snow tonight up the mountain. 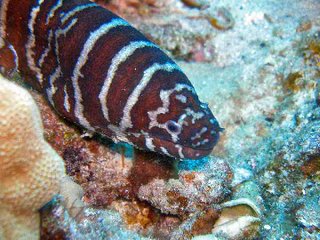 Today we saw 59 degrees in the early morning at our place. We have a rather large sloppy ocean swell today and the water temperature was at 77... winter's coming. Viz was down to about as bad as it gets here... say 20-30 feet in the shallower portions of the dive, but on an upbeat note, there were several turtles being actively cleaned at Turtle Pinnacle today. The surf should improve over the next couple of days, the water temp will continue to slowly drop for a couple of months.

Tomorrow we've got a pool session, and then later in the afternoon I've got to get together with the mechanic and do some adjusting on the new carburetor we had installed last week (running rough right now, but should be a quick fix, boats are so much fun) to make sure everythings in order before it gets screaming busy - the busy season seems to hit around the 20th-22nd of December, depending on which day Christmas falls.

The underwater photo above is of a Zebra Moray (Gymnomuraena zebra). I may have already posted this pic somewhere on this blog, sorry if it's a repeat but I just don't feel like looking back through all the archives tonight (but you are more than welcome to look through the archives - linked on the side bar to the right - and see if it's a repeat). These guys are always a thrill to come across. They don't come out in the open all that often, more often than not we will see their tails somewhere in a hole in a lobe coral and not be able to find their head.

Steve
Posted by Steve at 5:34 PM No comments: 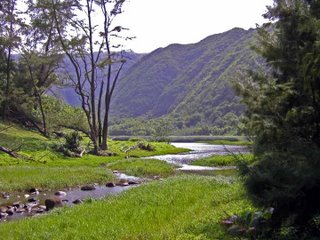 The Christmeas busy season is coming up. It seems to get really busy after about the 20th or so here. Starting tomorrow I'll be busy for a while. We had a couple charters earlier this week. I've got another tomorrow, with a class on Monday and more charters the rest of the week.

We had our first rain in almost a month tonight, didn't get nearly enough to do much, but if we can get another evening or two it'll help keep things from gettting overly dry. The wet/dry seasons in Kona can be somewhat reverse of much of the rest of the state because of our being on the leeward side of a 13,000 foot mountain. We see much of our rain in the late summer and during the winter it can be quite dry some years.

The picture above is of Pololu Valley, up on the north end of the island. It's one of my favorite short but brisk little hikes here. I don't get up there all that often, and I haven't been up there since the earthquake the other month. I've heard there was damage on the trail. I'll try to get up there sometime eventually to see if anything on the trail has changed.

I'm running low on fish shots I really like... I'll have to dig into my older stuff 'til I get the supply refreshed. Between flu, vacation, the cold which followed the trip, and now an ear infection, I haven't been in the water as much lately as I have hoped. I'll keep Bob busy diving 'til the ears are back to normal and then I'll get my turn...whoohoo! I'm hoping be early this next week the ears'll be back to normal.

Steve
Posted by Steve at 9:27 PM No comments:

Email ThisBlogThis!Share to TwitterShare to FacebookShare to Pinterest
Labels: living in Kona 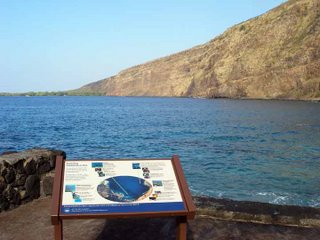 I went down the hill today to check on what all's going on at the bay. When we had our earthquake back in October and they had landslides, the state basically shut the bay down. It's been reopened for recreational use, but it is more limited than before the quake.

The hiking trail down to the bay has been officially closed for now. The DLNR has had an officer down at the wharf and park much of the time. Someone has put up informative plaques (one is pictured) down at the bay, which is quite nice, and they also have a booth down at the old wharf with this informative video (I linked this back in September, but here it is again) on snorkeling and critter care. They've set up buoys in the bay approximately 100' from shore in front of the monument and inside towards the beach. No boats/kayaks/snorkelers are allowed to land or swim within the buoys and they had a boat out there enforcing that. I guess this is supposed to go on indefinitely for now. Kayaks and snorkelers are allowed in the water, as long as you stay outside the buoys.

I suspect they are also cracking down on improper interaction with the dolphins. That has been a hot button topic here for a number of years, and now that the DLNR has a boat down in the area I suspect it'll be enforced. Last month there was a whale that turned up off Kailua and was basically killed by sharks - several boats got near to it to film it and there are rumors that there's going to be trouble for the photo/video guys and the captains of the boats as far as getting close in violation of the marine mammal protection act. We'll see if there's any fallout from that.

So basically the bay is open for recreational kayak use, the beach has been reopened, but don't expect to get all the way over to the monument.

Email ThisBlogThis!Share to TwitterShare to FacebookShare to Pinterest
Labels: dolphins, living in Kona

Surf's actually not all that bad.... 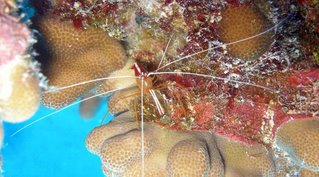 I took a shot of this cleaner shrimp on a fun dive yesterday. I had no charter so I went down to the Place of Refuge to get wet for an hour. Things were a bit more stirred up than usual in the shallows, but the swell they've predicted really hasn't disrupted the diving much at all. Water temperature is still quite nice. I was seeing 79 degrees yesterday morning at depth on the dive.

We put a new carburetor on the boat the yesterday. It seems to be a never-ending money pit, that's the way boats are, but it runs noticeably nicer.

It's still a little slow for us right now, but it's sort of the calm before the busy season. The last half of the month is starting to book up.. if you are looking at diving in Kona, get on my Wanna Dive website and e-mail me - I'd be happy to set something up.

Well, off for now.

Steve
Posted by Steve at 7:54 PM No comments:

Email ThisBlogThis!Share to TwitterShare to FacebookShare to Pinterest
Labels: shrimp

Big surf expected in Hawaii for a couple of days...

I thought I'd post a couple of sunset photos from this evening. Very orange. It tends to get that way when the vog is up a bit. 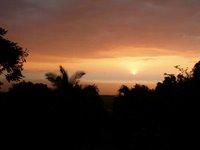 Diving conditions have been excellent the last couple of days, but we're expecting swells to come up. They apparently had nice 15 foot surf off the north shore of Oahu today, but it's supposed to hit 22-28 foot faces by tomorrow.
Our island is usually shaded from northwest swells by Oahu and the Maui county islands, but we can still be vulnerable depending on the angle the swell comes in at. We'll know tomorrow if the big northwest swells are coming in. More bothersome to us may be the big west swell they are expecting to fill in. They say we could have 15-18' faces off Oahu from the west, if that happens it'll likely hit here too and mess up most of our dive sites for a day or two. A little later in the winter, west swells are rarely a concern, we're just in that season right now where they can pop up, it usually affects shore diving more than boat diving unless the surf is huge. 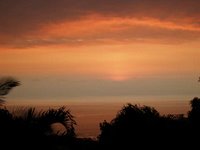 I haven't posted in a while. We took a long weekend on Oahu to watch the University of Hawaii/ Oregon State University football game. Good game... Go Beavs... Go Warriors too, but I did go to school at OSU. As residents of Kona, we like to complain about the traffic here, but our trip to Aloha Staduim took the cake for slow traffic... wow... 3+ hours to get from Waikiki to the staduim, took us 26 minutes to get back after the game in moderate traffic. I'm glad we don't live in a big city.