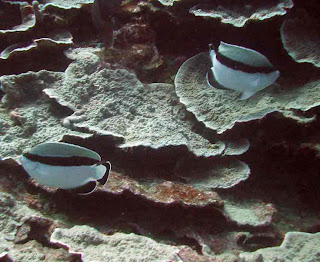 Here's a couple of Bandit Angels (Desmoholocanthus arcuatus) from a dive the other week. Hawaii only has a limited number of angelfish species on their reefs, most of which are dwarf species ranging to only 2-4 inches in length, Bandits however reach about 7 inches in length. These guys are not real common, but we've got a couple of spots where there's a good shot at seeing them.

So the latest on the boat is... it's still being worked on. Longest 3 weeks of my life... Anyways, it's really starting to shape up. It sat once again for a short while but we've got someone working on it now. We're fabricating new hatch covers, moving fuel lines/vents/etc, finishing the interior grinding/sanding/fiberglassing and such and it should be ready for paint hopefully sometime next week. After that it'll need about 6-10 hours of work - that's probably a week in mechanic's time - and it'll be done. I've got all my charters pretty much set for the rest of the month on my friend's boat and then hopefully I'll be able to hit the ground running after a couple days of runnning it. Pat and I will probably be in the poor house when the final bills hit, but the rebuild beats building one from scratch. When it's all done you'll likely be seeing a big post with lots of pictures... early on I thought I'd post pictures while it was all being done, but frankly it looks pretty horrible when you are in the middle of it.

Other Kona news. The NEW HIGHWAY is open - sort of. They've been working on a new highway coming into Kailua, starting at about the harbor, for about a year and a half. The new section opened up about a week ago, and they promplty redirected all traffic on to it and have torn up the existing highway to rebuild it, so we're still operating on basically a 2 lane road (one in each direction) for a while. At least you can tell what the plan is though.

Gotta hit the hay, I've got a charter in the morning. Later,

This is a test... google map image of Honokohau Harbor public ramp area....

People are always wondering how to meet the boat and I have to give out directions all the time. I've realized you can do a lot with google maps and figured I'll see if I can link an image here before I mess with it on my business website.


Cool... it works! You can zoom in and out, you can grab it and slide it one way or another to see what's off in other directions, all the usual google map stuff. Neat toys on the internet these days... One could keep busy for a while just looking at the coastline satellite image. For those of you unfamiliar with google maps, assuming you have an image above, click on the minus at the top left a couple of times and the picture will zoom out a bit, then you can run your cursor over the image and you'll see a hand icon, click on it and drag your mouse, or you can click on the directional arrows at the top left, and the image will move with it and show more... you can zoom in or out at any time, kind of a neat way to get a feel for the area. 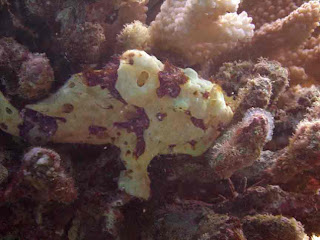 Here's a young frogfish, maybe 3.5 inches long or so. These guys start yellow and then tend to change colors to blend in with their envirnment. I wish I had a camera with a working flash when I took this. I may break out one of our older cameras to use 'til I can get the current one fixed.

So I haven't posted in a bit. Lots of stuff going on, but little action on the boat renovation until this week. The interior cosmetic work is now coming along quickly and I'm thinking it may be ready for all the electrical in a couple of days. I'm trying to find someone who can re-sew the seams on my canopy in fairly quick order. The old ones were falling apart so now's the time to take care of it. Pat's got a pretty good machine, but it can't quite go through several layers of sunbrella material, as well as the piping on the edge.

We've had some very nice dives. As far as water temperature goes, we're still seeing mostly 79-81 degrees on the dives. My personal highlights the last couple of weeks include this frogfish. Probably the best find, although I have no photographic evidence as I didn't have the camera that day, was a "family" of 4 Green Lionfish (Dendrochirus barberi) all on one coral head. They ranged in size from around 2 to about 4.5 inches in length. We don't see them too often, and usually just one or two at a time.

I'll try to get back in the habit of posting a bit more.