Merry Christmas everyone... + always keep one eye into the blue when possible.... 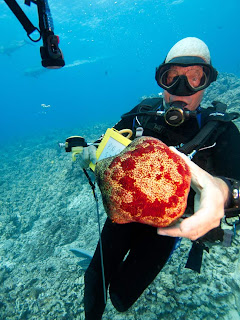 Here's another shot forwarded by customer Jim. This one was taken on his second dive ever with a camera... keeps getting decent shots. Makes me want to get some add-ons for my camera. This particular shot gave all of us a kick. Bob was showing customers a pincushion star, and the small crab or shrimp that lived on it, and Jim took the picture. It was only later after he was looking at the photo that he noticed what was in the background.... DOLPHINS!!!!! Make sure to click on the pic for the enlarged view. Jim actually managed to get a couple shots off that had dolphins in the background that none of us knew were even there. It happens, you can't hear them if they're not making noise. It's easy to miss things going on around you.

Today was a wonderful Christmas diving day. We did a night dive last night (14-15 manta rays, what a nice Christmas Eve) and got back into the harbor before a thunderstorm hit us - man it hit hard, we were standing in running water while cleaning the boat. Today was sunny and calm. We did a couple very nice dives. Highlights were Flame angels, Flame wrasses, Divided flatworms, Nudibranchs, Curious Wormfish, Octopus, a Tiger moray, lots of eels and more. It was pretty quiet on the water today, I only saw two other dive companies out, along with a couple of dolphin watch/snorkel companies. Nice day for a boat ride. 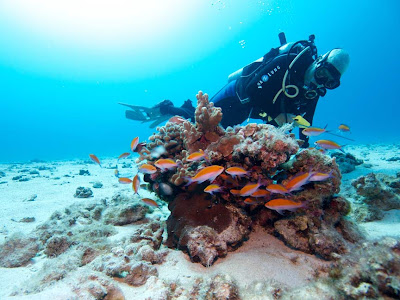 OK, I'll do something a little different. I'm posting a photo that customer Jim forwarded to me that I find interesting. It's of Bob (one of our guides) and a group of anthias.

Back in the day, there used to be a dive spot called "anthias rock" up in Garden Eel Cove that the dive charters used to go to. It was a rock in 102 or so feet of water that had maybe 4-6 anthias on it. We had a terrific high surf several winters ago that basically buried all but the top of the rock and the anthias site was no more... same surf episode moved the garden eels about 20 feet deeper than they had been prior to that. At some point, divers started visiting a rock out in the sand off one of our other sites to see the anthias that were living at it (anthias often will congregate around a rock out in the middle of nowhere). The last year or so this rock has really become well populated with anthias, tends also to have cleaner shrimp and eels hanging out at it too, so it's an interesting spot.

This particular photo was taken on our customer's very first dive with a housed camera... nice shot! It took me several dives with a camera to come up with something I consider to be a "keeper". He happpens to have the same camera I now own, but with a nice strobe and a wide angle lens with a domed port. The wide angle makes for an interesting perspective, and keeps pretty much all of the scene in focus as well. I'll probably move that direction with my gear at some point.

So I came down with a nasty chest cold for about a month after my trip. I'm pretty much over the caughing and back to diving again. Water conditions have been holding up pretty well, with a bit of a swell that really doesn't affect us much. Last couple nights we've had thunderstorms in the Kailua area - rare event here - we're doing a night dive tonight, hopefully that won't occur again. 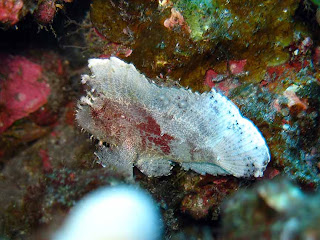 I just found this picture on a laptop I'm about ready to "retire" and thought I'd post it while it's on my mind. It's a nice "white" leaf scorpion. Leaf scorpions come in all variety of colors. I probably never posted this one because it's not exactly facing the direction I want.

Today's diving was good. The water's starting to get a slight chill on it... still around 78, but it's a cool 78 I guess. I managed to come home from vacation feeling fine, but 2 days later I had something attack my chest... lots of caughing for a couple of weeks, but I'm back to where I can lead dives again so I'll be trading off with the crew. I did the second dive today, there was a bit of a swell coming up so it was a bit murky, viz down to 70-80 feet or so. Nothing out of the ordinary today, we did see a few flame angelfish among other things, good dive.

We went north of Honokohau Harbor up to the Kona Airport site for the manta dive last night. Our divers saw one manta ray on the afternoon dive, that's always a good sing. On the night dive it was obvious there were several rays that had shown up - all the snorkelers from the other boats were squealing with delight.

There were 7 or 8 mantas hanging around and everyone had a teriffic time. Here's a short video from a while back on a night there were a few mantas at the dive. It looks like there were only 4 or so in this video, once the numbers get up a bit higher it can be a manta madhouse.

Hopefully it'll keep busy with mantas through the Christmas season. We're looking to be pretty darned busy... Ive got today off, then my next empty day is the 5th of January. 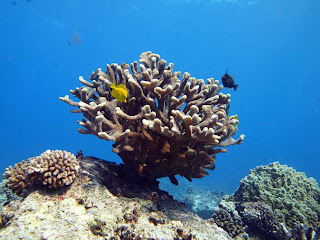 I kind of drifted away from posting about the diving. I'll get back to it now.

So far, with the exception of last night (ended up being a lot of rain and a lot of wind), the diving's been very good this month. We've had 78 degree water and it's been mostly flat, some days lake flat. We've had several days with sightings of dolphins underwater, the whales are starting to show up (although we're not hearing them yet), the mantas have still been around (although we had to go south last week one night to gind them) and we're keeping busy diving.

Here's a shot of a nice antler coral. We're always taking a peek into these as we pass, they attract a lot of critters and you never know what you'll find.

Steve
Posted by Steve at 9:26 AM No comments:

Email ThisBlogThis!Share to TwitterShare to FacebookShare to Pinterest
Labels: coral

Yesterday the island had it's first major snowfall of the season. Here's a link to the webcams up on Mauna Kea.

The Big Island sees it's share of snow just about every year. I'm not sure how often it snows on Haleakala over in Maui. Last time Oahu got snow on was in March of 1953 as far as I can tell.
Posted by Steve at 9:18 AM No comments:

Email ThisBlogThis!Share to TwitterShare to FacebookShare to Pinterest
Labels: snow in Hawaii 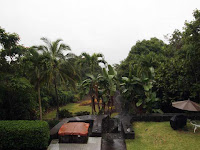 On Wednesday they started putting out civil defense alerts for flash flooding for the island starting on Thursday evening, it finally started raining about an hour ago, call it 10:30 Friday morning. Kauai and Oahu had some good rains and wind damage yesterday, Maui started raining overnight, we'll see how it is here. This is what it looks like outside my house right now. I'm only 2 miles from the ocean and normally we can see the shoreline, the ocean and a whole lot of sky... now it's just gray space beyond our yard.

Click here for the current weather loop. Note: if you're looking at this on another day, it'll be current for then, not December 10th, 2010. Subtract 10 hours from the UTC time to get current Hawaii Standard Time.

I've cancelled tonight's charter. Frankly, it'll be very wet at the very least, if thunderstorms come up it'll be dangerous. Everyone's better off waiting a day or two if they can.

So today I'm running errands. I just ordered essentially a thousand bucks worth of pegboard accessories for the shop. It's not cheap setting up a retail store. I'll be unpacking boxes all day tomorrow and maybe into Sunday, then I gotta figure out where to put it and wait for the next shipments to come in.

Christmas season is almost fully booked, a week ago I had a couple charters booked, now I've got charters every day from the 17th through the third, and a good portion of them are already full... lots of phone calls the last week. Hopefully this is our only storm coming through the next few weeks. From the doppler, it's looking to be the longest stretch of rain (meaning 12+ hours) we've had in Kona in about two years. We don't typically get all day rains.

It's been gorgeous here for a couple of weeks. 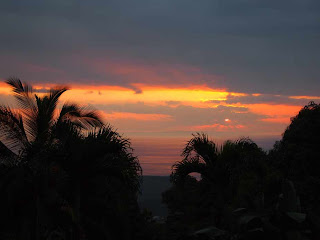 Here's a shot of a sunset 3-4 evenings ago... it's getting to be that season where the sunsets are particularly gorgeous at our house. I suspect by tomorrow night we'll be seeing sunsets again.

Well, I took a vacation in November for a couple of weeks... Phoenix area and Vegas, with the DEMA dive show being the focus of the end of the trip. I haven't posted other than a couple of times in the trip, so I'll try to get back into it. Rather than bore you with DEMA reports, I'll bore you with highlights of my trip. 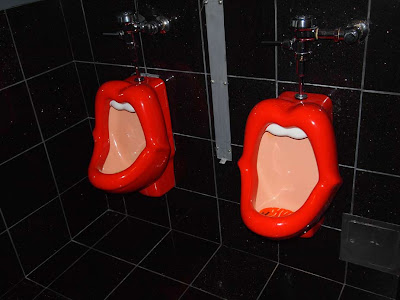 After that it was pretty much all downhill.

Actually, a customer we had on the boat the week before the trip knew Phoenix and recommended we go to Gallo Blanco, a small mexican place that was real good. It was close to the airport so we decided to do lunch there after landing. This is a shot of the tacos and a torta we had. 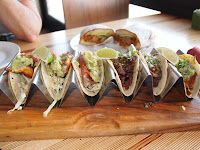 They were wonderful. It's a really good little spot for some good mexican food for a good price... she didn't even mention the urinals!

Here's a bunch more photos from the trip. 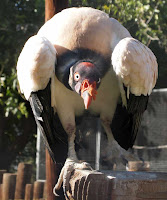 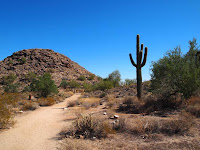 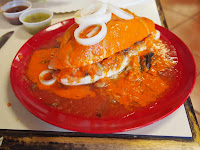 Mannaged to see an ancient Indian cliff dwelling. It was an interesting spot, sort of idyllic with a river, flat area beneath the cliffs to grow crops. Interesting it went vacant around 1500 or so. 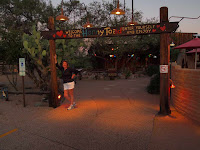 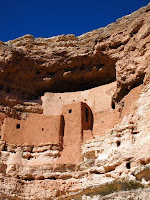 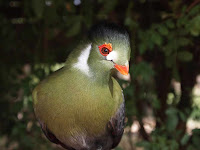 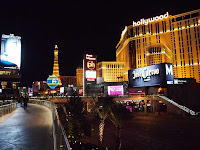 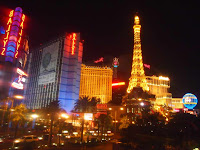 We were able to spend some time with our parents on the front end of the Vegas portion of the trip... good fun for us as we don't get to see them all that often.

All in all we did a whole lot of very little. I'll close with a shot of my 52nd birthday dinner meal - a 22 inch loaded hot dog at Alice Cooper's restaurant in Phoenix. Now I can say "been there, done that", if not for the fries, two would have been a cinch to eat. 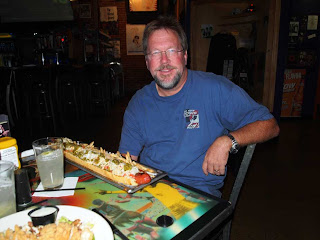 That's it for a vacation report, I'll spare you the details of DEMA other than it was a pretty busy show.... lots of dive stuff to look at.

Steve
Posted by Steve at 7:45 PM No comments: