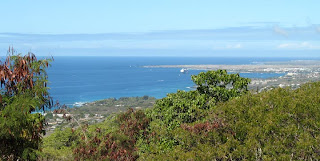 I pulled over to take a quick shot coming into work this morning. We've had a bit of a breeze the last 2 or 3 days that's blown out all of the vog. I was hoping for a great sunset, but we've got a bit of a front coming in.

We're into the heart of the slow scuba season right now. From what I've seen, lots of the boats aren't running full, if they're running at all. I've got a bit of a lull myself, looks like no charters through the weekend unless I get a phone call. I go with just two divers, I may be one of the few that does, so it doesn't take much to get my boat out for dives. The booking inquiries are starting to pick up for March and May... that's a positive thing... the January/February slow period seems to happen every year for me.

We had a manta charter the other night. Numbers have been a bit on the low side, there were two that night, and we've had to go to the Sheraton site to find mantas. Everyone's hoping the plankton picks up at Garden Eel Cove soon so the mantas come back there. It comes and goes, that the way it is, but when it's thick, the site is thick with mantas.

I'm down at the shop again today. I'll probably be spending quite a few days this upcoming month there. It's looking pretty good. I've got internet at the office, so I've been spending some of my time reworking my Kona scuba diving website a bit in hopes of regaining some search engine karma after switching website URL names in November. That's coming along now too, starting to get e-mails and phone calls generated from the site again after a bit of a slow time.

Steve
Posted by Steve at 3:35 PM No comments:

Today was an awesome day on the ocean in Kona Hawaii... 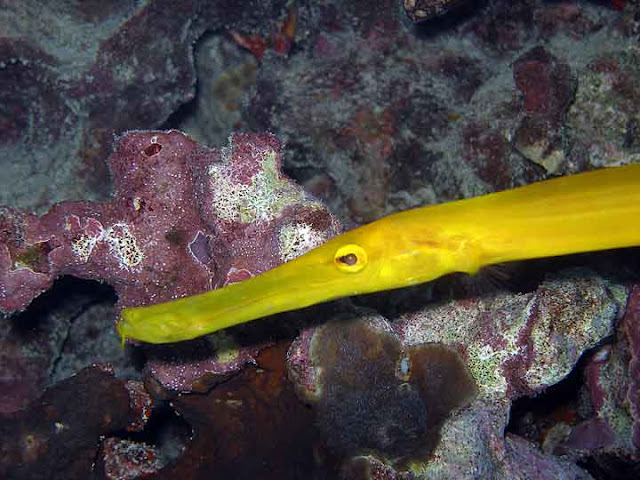 Today was a great day to be scuba diving here. The ocean temperature is still hovering right at 78 or so, the water was flat, viz in the 150 foot plus range, and there were whales everywhere you looked. We saw somewhere between 8 and 20 whales - we saw 8 on the way to Golden Arches, then tons more on the way back to Honokohau Harbor, many of them on the way back were likely repeats, but not all of them... lots of whale activity in Kona right now. I talked at the boat wash at the end of the day with one of my friends that does whale watches, he said it was like that all the way up to Makalawena.

A quick note.... Been scuba diving some this month... 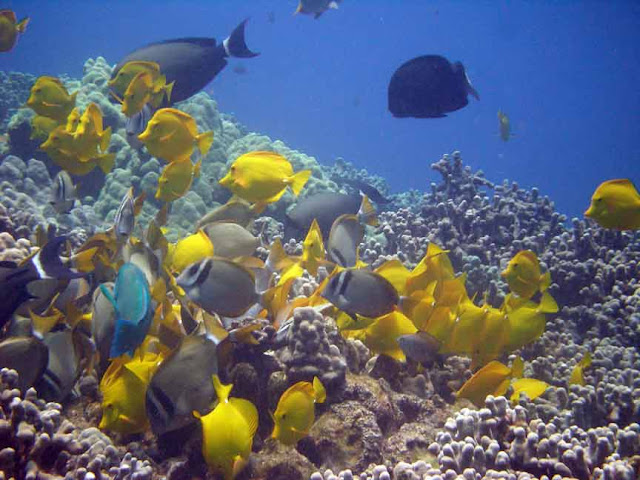 I'm hanging out at the office again today, but I have charters tomorrow afternoon/eve, Saturday, Monday, Tuesday we've got double charters (am and night) so we're keeping fairly busy for now. My cash register arrived the other day, gotta figure out how to program it now.

The water's amazingly warm for January. We've been seeing 78 degrees - it's much more comfortable than the 72 or thereabouts we had last January. The whales are out in increasing numbers now, we're hearing them sing on a significant portion of the dives. I hope this is the year I finally get to see one underwater... Bob and Cathy have been hogging all the fun the last couple of years... it's a rare and exciting event when it does happen.

I'm on an old laptop I carry to the shop with me, so I don't have new photos to post, I'm trying to link a photo from some time ago on the blog... if it worked you're seeing a school of yellow tangs and whitespotted surgeons grazing on the reef. Surgeons/tangs are herbivores and pick algae off the coral, keeping everything nice and healthy. ....Ah, it seems there's a sizing issue with the photo I don't understand, still works anyway. 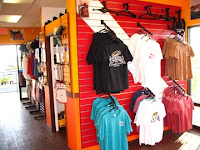 January and February are typically slow charter months, so I'll be spending every day I'm not on charter down at Wanna Dive's office. I've got nothing on the books for a few days, looks like the surf's gonna be up pretty big anyways, so I'll be hanging out at the "shop" noon to five at least the next several days. 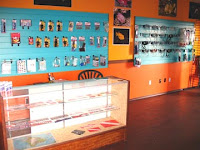 On a personal note, my puffy knee from yesterday has un-puffed and feels fine. Hopefully I can keep excercising a bit harder during the slow season here. I tend to do nothing physical outside of the charters once we get going out every day.

So the "shop" is pretty much ready to show off publicly these days. Here's the latest photos of the interior. I don't have a ton of money to throw at it, but I've got a growing selection of dive related accessories hanging on the walls now. As I slowly fill it up and the boat business season picks up I'll hopefully be able to man it full time. For now I'll be in there whenever we don't have a charter going out. Feel free to drop by between noon and 5, although it's more like 4 and 5pm when I have charters, so you might consider calling ahead. 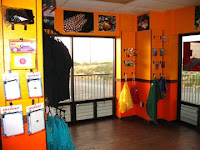 I'll be closed Superbowl Sunday, otherwise it's either the shop or the charter every day 'til Pat and I take a few days off in late May that we're trying to plan.

Edit: A friend pointed out I didn't say where the office is... you can find it across the highway from Honokohau Harbor immediately above the Tesoro gas station. I hesitate to give out the address, I don't take mail there and most of the GPS units/phones won't pinpoint it at all (someone told me their's was quite a bit off, they saw the gas station though as they drove past and came back and found it right away), and street addresses don't make sense to most people as they're not set up the same as on the mainland and few buildings have street numbers on them. Google maps will ballpark it pretty good, the address is 74-5035 Queen Kaahumanu Highway ste 1b. 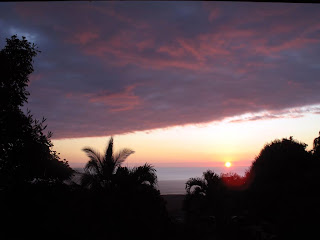 I generally don't make resolutions, but this year I decided to make one. I've decided that since I'm in my 50s, I want to get to where I can walk 1300 feet without stopping or huffing and puffing. That would be 1300 feet uphill.

The day after Christmas Pat and I had the morning off and we decided to tackle the Captain Cook Monument trail. I haven't done the whole trail in probably 8 years, and had done the top 2/3rds a few times last year and had gotten pretty gassed. That day it wasn't so bad, but I still had to stop a few times and my knee was swollen for several days. I decided then I need to confront that trail and win before I get any older.

Well today was trail attempt number 1 of the year. We went down to our 2/3rds turning/viewing point and back. It's about an 800 foot elevation change in 1.2 miles. The section below is shorter and steeper, with more loose rocks underfoot - I'll add that on after I master the top section. Today's walk was better than the other week's attempt, stopped twice for a couple of minutes. At this rate I'll be walking the whole trail next month sometime. My knee swole up immediately today... it's actually the going downhill that bothers it the most. Quite the noticeable limp about an hour after the walk. I wrapped it up and iced it and it's shrinking already this evening, yay. Next time I wear a brace on the way down.

Gettin' old's fun. I figure it's time to take it on now. Anyway, it's a fun walk/hike. The trailhead is about 200 yards down from the top of Napo'opo'o road. It cuts through tall grass and scrub brush for much of the top two thirds and then opens out to a picturesque view of the ocean. The vog has been pretty much non-existent the last few days and we had a great view for miles. Once I get to where I'm handling the top portion readily I'll add the bottom portion. It's a worthwhile hike as the monument area is some of the best snorkeling (not so great for diving though, I'll have to write about that in another post) in the entire state.

Our surf of the other day went down yesterday. I had a charter in the morning and we were able to get out and find decent water. By mid-day it was pretty decent. Today the ocean was pretty nice. It should be fairly nice tomorrow, but by the looks of the swell chart at Magic Seaweed it'll bump up a bit for mid-week. Looking at the chart now it's not going to be as large of surf as it appeared when I looked at the chart around noon time. Looks like the bulk of the heavy surf will be north of us. This site is a great site to check on surf conditions for the next day or two.

Steve
Posted by Steve at 9:27 PM No comments:

Email ThisBlogThis!Share to TwitterShare to FacebookShare to Pinterest
Labels: getting old, living in Kona, sunset

Happy New Year!!! We've started ours with some big surf.... 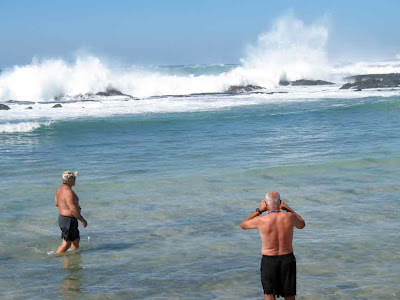 I hadn't posted in quite a while... been getting inquiries about that, thanks... We've been real busy with dive charters since about the 15th of December.

Wednesday we canceled our charter because of this (the picture above). I took this photo out at the keiki tide pool out at the natural energy lab. It's a cool spot to go and watch waves crash. I took this shot Wednesday morning BEFORE the big west surf peaked. It's still big and it's now Friday morning. Pretty much the only dive companies going out are the real big boats. I'm torn, as it's possible to get in and out of the harbor if you time it... but basically you are stuck down in Pawai bay with crummy diving conditions and I can't see forcing passengers to go or pay a cancellation fee. My litmus test for cancellations is sort of, if it's a day that my wife and I would be irritated about having to pay to dive on, I can't see not at least giving customers the option of canceling their dives. Generally when I offer people an out, they take it - the one time I can recall anyone insisting we're going (former scuba instructor on the east coast) even after we got out on the water and I offered to turn around, that individual spent most of the charter throwing up... not sure how much fun they had.

I'm hoping we're back to dive-able conditions tomorrow. We're supposed to get another big swell coming on the weekend, hopefully it will be more from the north than the west - it's the west swells that really wreak havoc with the diving here.

Steve
Posted by Steve at 9:02 AM No comments: