Lots of good scuba diving lately in Kona on the Big Island of Hawaii.... 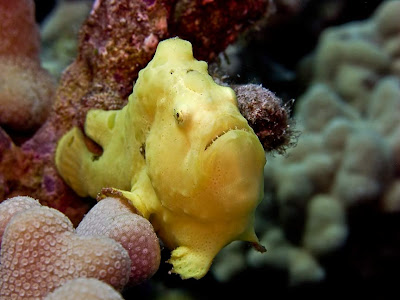 I've been really busy this month. We had a slow September so October has been a pleasant surprise. Today we had the day off, so it was football day... we had some Corvallis, Oregon area friends visiting so we all sat down and watched the USC Trojans vs. the Oregon State Beavers football game. Good game, our team was on the wrong end of the 6 point game though.

Water conditions for scuba diving in Kona have been pretty darned good lately. We've had a run of very good divers on the boat the last several weeks, so nearly all of our dives have been in the 75-90 minute range. Bob's off in Sulawesi Indonesia for some diving fun, so Cathy and I have been splitting all of the diving the past couple of weeks.

I haven't been carrying a camera around since my G9 stopped working. Tomorrow we've got a light load with a couple of gals carrying cameras, so I might take my wife's older camera down to see if I can get some shots off. I'm so spoiled these days, after diving with a camera with a 3" LCD for a couple of years, we'll see if I can tolerate going back to something with a large postage stamp sized LCD screen. I've got my eye on 2 models right now, the Canon G11 and the Canon S90. I'm waiting to see what comes out for housings from third parties for them in the next couple of weeks. I'll discuss more of what I'm looking at in a later post.

Since I'm not taking pics right now, I'm playing around with photoshop on some of the older ones. This pic has been on the blog before, maybe a year or so ago. My wife, Pat, took this frogfish shot on a dive. My older version of it had a hotspot on the forehead, this one we managed to tone it down a bit. I'm looking at downloading the new beta version of Lightroom my next day off and playing around with it to see how well the slider adjustments work on my older jpegs. 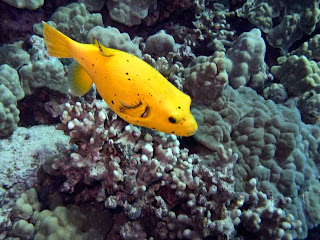 I just realized my blog is 4 years old now. Initially I figured on about a post a week, well 4 years and nearly 600 posts I'm a little above the number of posts I expected to be making... that's a lot of fish pictures.

The weather on the Big Island, at least Kona side, is gorgeous right now. The state had a flash flood watch out the last week or so, and a couple islands got hit with a lot of rain, we had about 1 evening of reasonably heavy rain and that was it.

The diving's been consistently good, maybe a bit of an algae bloom the last couple days, and the water's still warm. No need for the thicker suits just yet, that'll probably occur some time in December.

Here's a shot of that rare yellow phase spotted puffer we've been seeing. I took the shot last year, but we still see this fish from time to time - it's always a thrill for us. Cathy's been leading dives here since the late 70's and it's the only one she's ever seen.
Posted by Steve at 8:40 AM 6 comments:

The office is starting to come together.... 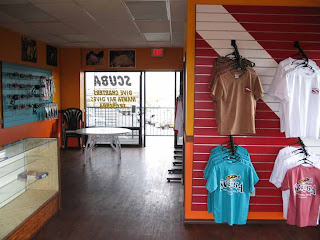 I'm semi-in at the office, have the shirts hanging and a few masks available if needed. We're pretty much only using it to do paperwork and intro dive courses at this point, but it's coming along. I'm trying to spend an hour or two there Monday through Friday, usually 4-5pm after day charters when I don't have a night dive going out. Eventually we'll man it full time, but that's off in the future at this point.

I've been playing around with getting prints from Costco and have started hanging them along the top of the shop.... fun for me, helps give the office a more lived-in look.

Diving's been pretty good as of late. Today the viz was down from some kind of algae/plankton bloom. We're still hanging around in the 79-80 degree range as far as water temperature. Today's dives were up at High Rock and Turtle Pinnacle. I dove the second dive... nice long dive. The last diver was up at 79 minutes.

Email ThisBlogThis!Share to TwitterShare to FacebookShare to Pinterest
Labels: office

No diving tomorrow for many, maybe most, dive companies in Kona... Ironman is happening... 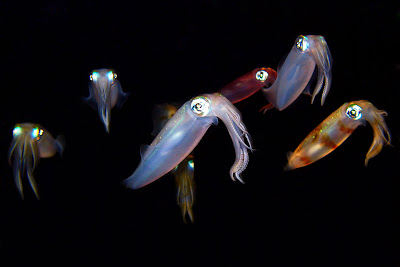 One of these days I'm going to have to get downtown for all of the Ironman festivities. Before my wife Pat and I moved here we came out for a vacation and it happened to be Ironman week. It's fun... lots of good energy. I still am impressed with seeing Alii Drive lined with spectators, many with contestant listings and looking up numbers as people approach and then yelling encouragement... "way to go Mark" ... and such, using the racers names. It's a neat event. Since I've moved here though I tend to stay away or spend the day watching college football to avoid the crowds.

Yesterday, well I guess it was the day before yesterday now due to the late hour, I was heading off to a charter and realized if I had started into town just 10 minutes earlier I could have caught one event I haven't witnessed as of yet - the Kona underpants race. It's more of a parade than anything, there's no winner and they're not going very fast. It started several years ago when a couple of the racers were offended seeing other racers and others walking around town (grocery stores, restaurants, etc) in banana hammocks (Speedos, for those who are not familiar with the term) and decided to get a group of racers together to walk a portion of downtown Kailua in their tighty whiteys in protest. It's turned into a sizable event now, I think they had over 400 co-ed participants yesterday morning. It's become an event that raises money for local charities. I think they hold it the Thursday before the main event at 8am, at least that's when it was this year.

Not sure if I mentioned this, but my camera gave up the ghost a week or two ago. I'm now going through my old stuff and either finding pics I've missed, or altering (hopefully for the better) pics I've posted before for a little while 'til I figure out what I'm going to do about a camera.

Our local Costco just started printing posters up to 30X20 inches on a new large format inkjet printer they picked up, so I've been having some fun going through my photos and finding some I can blow up and hang on my walls in the new office/shop. I'm thinking I posted the original of this pic earlier. If I did, it had most of the original background in it... rocks, backscatter, some guy's fins, etc. I spent a little while (call it a couple hours at least) after the charter tonight in Photoshop cloning out all the extraneous stuff so I'd have a pic I wanted to hang on the wall (now I only wish every squid was in focus). I'm happy with the way it turned out for now, at least 'til I see it blown up.

I'm up late tonight... dove the manta night dive and I usually can't sleep afterward. I got involved with the squid pic and couldn't stop. It's 2:30 am and I probably should crash, although since they're basically shutting down the highway to the harbor tomorrow I have nowhere I have to be early on. 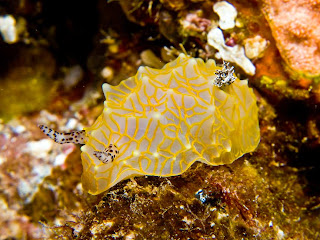 After about 5 months of working nearly every day, we're back to having days off again. It seems like I'm hardly working at all, but we're still having around 20 dive charters a month right now. I've been spending a lot more time in the office/shop these days.

Today I have a confined water session with a student. I'd pretty much gotten away from teaching the full certification course the last couple of years because the confined water stuff was hard to schedule. We've been sticking primarily to referral certifications, where you do your classwork at home and then come here for the diving portion of it (I still think this is probably one of the best ways to learn if you only intend to dive while traveling). I'm looking at getting back into it to where we're teaching the full course here at this point. One of the pools I've used in the past is generally available in the evenings, so I'm planning on scheduling the academic and pool work over 3 evenings... it won't be for everyone, some people want a faster course... to where we can do a good job of it and not rush. This will be more like it was back on the mainland, with a few evenings worth of classes and two days of diving rather than trying to cram everything real fast into 3 days.

We've had some very good diving the last little bit. We had a fun father/son group on the boat the other day. After the first dive the son came up and said he saw more on that dive than in a whole week of diving off Florida... I liked that comment. I think they dove somewhere in the Keys, not sure where. I haven't dove Florida, don't know how we compare, every place is different.

Here's a Gold Lace Nudibranch (Halgerda terramtuentis) from some time ago. We generally find these on slight overhangs.