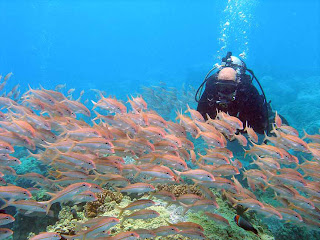 I'm hoping Bob doesn't mind me posting this. It's a pic I snapped the other day. It's interesting in that I've tried numerous times to get a decent shot of the goatfish we have that hang out in large groups at several of our dive sites. I've always tried with the flash, and now that the flash doesn't work, I tried it using manual white balance... much better. It turned out quite nice in my opinion.

These goatfish are cool in that sometimes there's nearly maybe a couple thousand in this group, and if you approach them quietly you can pretty much blend in and feel like part of the group.
Posted by Steve at 10:10 PM No comments: 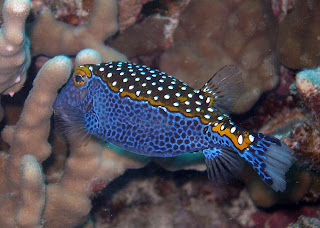 This is a picture of a male Blue Boxfish I took last month before my flash died on the camera. The blue really pops out on this one.

It was a gorgeous day today. We've had a fair amount of rain the last couple weeks, but it's been dry today.

The manta dive has been hopping... we had 10 last night and Bob and my friend, who's boat I'm using, are out on another charter tonight with another group. Our little stretch of charters is done for a few days after tonight and then it get's busy again.

OK... Whohoo!! On the charter two days ago we went to a site where we had a fish that is among our more rare fish here in Kona - the cousin of the Blue Boxfish, the Whitley's Boxfish. We actually see the females of this particular species with good frequency, but the males are very infrequent. I've seen one maybe 5 times, Bob's seen one in Kona maybe once or twice (we've both seen dragon morays more than male Whitley's). So I briefed it and described it and one of my customers actually found it on the site!!!! I didn't have enough time to wait for it to get into a good lighting situation (remember, my flash died) but I did manage to snap a couple shots that at least showed up. I'll post pictures of it a post or two from now.

Speaking of rare fish!! Tonight's charter was sort of a divided charter, we did the first dive with a couple of divers, and then met another group who was going to dive on the night dive. On the first dive, Bob found a Hawaiian Morwong. It's the first one he's ever seen here, I've yet to see one. I'm hopeful I can see it and get a shot at some time.

Another day in paradise.... 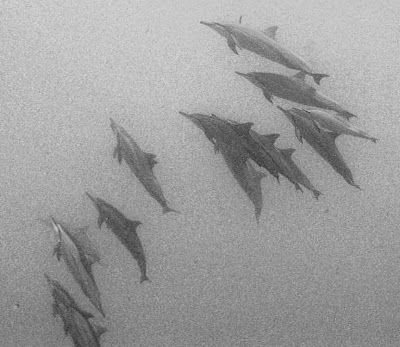 We had some good dives today. I've got a fun family group of 6 on board for a few days. Today we had a couple of nice dives. Highlights of the dives included moray eels, Bandit angels, a couple of flame angels, puffers, a rather large spotted eagle ray, and other cool stuff. Oh yeah, did I mention dolphins? I took this pic this morning, it's in grayscale and the contrast is turned up so it shows... dolphins sort of blend into the blue of the ocean so it's really tough to get a great photo unless you are only a few feet away. We don't get dolphins while on dives all that often, we usually see them on the surface but not underwater, but sometimes we get lucky, this time I actually had a camera on hand. This group probably came within 20-30 feet of us a couple of times.

We just had an earthquake about 5 minutes ago... and it lasted about as long as the title of this post, one nice little pop, maybe a fraction of a second but strong enough to know it wasn't our dog falling over (she's getting up there in age and sometimes trips up). It's the first one I've felt in a few months. Here's the link - http://tux.wr.usgs.gov - The red square (if you read this today or tomorrow) just south of Ho'okena is the one.

Gotta hit the hay, I have to be up about 6 tomorrow to get to an early charter. 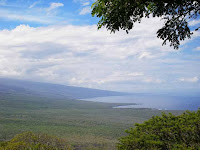 Here's a couple of views from up the hill this afternoon. It's quite nice today. Everyone's been keeping an eye on what was at one time Hurricane Cosme. I think it's currently classified as a tropical depression and is located well south of the island. 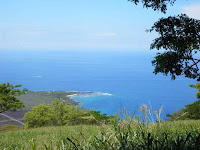 We occasionally get inquiries about hurricanes, more specifically we get inquiries about avoiding "hurricane season"... while technically we do have a hurricane season here, they usually have little to no effect on Kona itself. Hurricanes in our part of the world tend to develop in the eastern Pacific, off Mexico or Central America and then head west in our direction. They tend to peter out for the most part by the time they get here as they swing over cooler water as they approach us. Oftentimes when they do reach here they swing south or north around the Big Island... something to do with a 13,000 foot high wall (Mauna Loa)redirects them a bit usually. The east side of the island does seem to get plenty of rain, wind and surf, but Kona tends to sit in the shadow of the mountain and gets very little activity. I've only seen rain or wind from a named storm maybe once in the 8+ seasons I've been here. Today it's sunny, calm and flat out on the water.

So something's gone awry with my little Olympus sp-350 camera. It started a couple outings ago and is definitely a problem now. The flash is only operating intermittantly. I noticed it wasn't working as I blew a bunch of easy shots, tried looking at it and taking a shot and nothing happened, readjusted it, took a few more dark photos, readjusted it again and pointed it towards myself to see if it's working - it did, but only for this shot. It still isn't working properly otherwise. Pat liked the shot, especially since it makes me look, in her judgement, about 70 pounds heavier than I actually am. 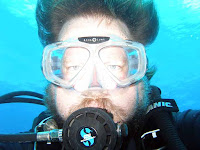 Steve
Posted by Steve at 1:14 PM No comments: 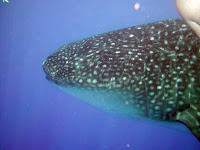 Today I put a couple of my passengers on my friend Ron's boat. They dove with me a few years back and came over to dive again. Today's experience was sort of one of those "once in a lifetime" experiences for them. These four shots were taken by Alan from Scotland on the charter. 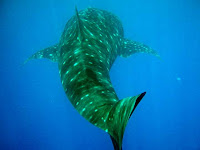 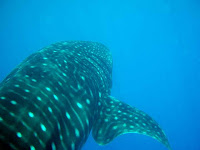 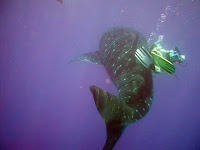 The group was just finishing their first dive and Ron noticed a group of boats offshore, figured it had to be a whaleshark or something exciting. The group got about a half hour of snorkeling with it before it was all over. This last photo gives you an idea of the size of the shark compared to a person.

I found this unusual fish the other week.... 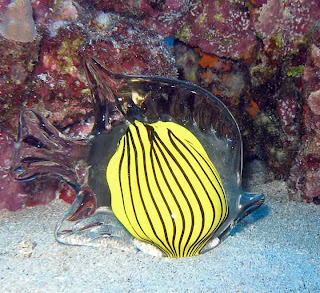 The rare Hawaiian golden glass fish... OK, so it's probably someone's geocache stash. I was down with a couple of divers at 90 some odd feet a couple weeks back and looking for some critters that used to be under a rock I know of and saw the yellow in the shadows... Oooh, I was excited to get closer and see what it was. Turns out it was some kind of table ornament. I figure if I spent enough time on geocaching websites I could find out who put it there. Evidently geocaching is a fairly popular among the GPS using crowd - hide an item and take the coordinates, post them and then the next person to find it replaces it with another trinket, or something like that. I was tempted to take it, because funny enough, my wife has two of the exact same thing (except blue and red in the gut) that she picked up at Pier One somewhere sitting on our table at home.... Stupid me, I should just have swapped one of them out for the yellow one and seen if she had noticed.

I've been away from the computer for a while, hence no posts. I came down with a nasty bug for 3 days that had me pretty much in bed, luckily on days I had no charters, then I've had charters and... computer troubles. This one is working sporadically, I'm doing mail on the new one, I've archived all my files on an external hard disk but I'm still trying to work out an issue with the video card on the new computer - frequent blue screen of death when playing media files type stuff - before I decide to transfer everything or take it back.

The boat is coming along, all too slowly for my tastes, and I think it'll be ready some time during a real busy week I have coming up at the end of the month. In the meanwhile I'm running charters off a couple of friends' boats. That arrangement keeps them, Bob and I busy, but doesn't help much with the bills I'm running up... unfortunately expenditures don't stop when you're out of the water in this business... but the boat's taking shape and it'll all be worth it in the end. The bench seats are essentially done and they were working on building storage where the engine used to be this morning. I've decided I'll post pics of the finished product when it's done, as it definitely a work in progress right now and doesn't look like much at this point.

We've had absolutely beautiful weather the last several days. The vog has been gone for 2-3 weeks now as the volcano stopped for a while. You couldn't ask for a more gorgeous time to be in Kona as we had enough rain the last month or two to green everything up.... Those who've been here lately are seeing it as we all think of it.... green land, blue skys and seas.

We had five mantas last night on our charter. It's been zip for mantas the last 3 nights up at Garden EEl cove so my friend took the group to the Sheraton site and had good luck.