Argus groupers, what a pest... 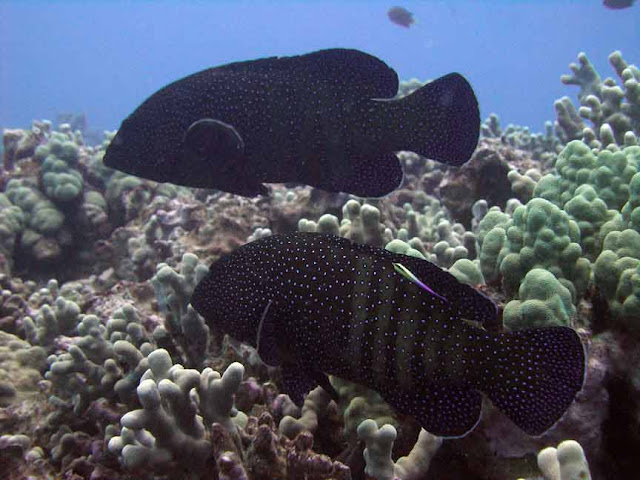 Back in the mid to late 50's fish and wildlife (or some official branch along those lines) thought it would be a clever idea to introduce 10 or so species of fish to the Hawaiian Islands. Well, three have survived and two are pests. Our grouper is now found all over the reefs, quite thick in many places.

Email ThisBlogThis!Share to TwitterShare to FacebookShare to Pinterest
Labels: grouper 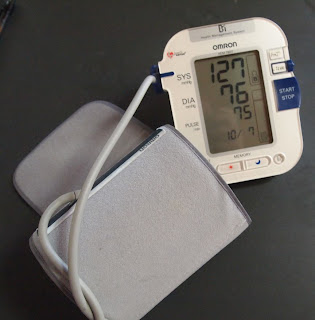 ...and I'd been thinking of posting one about the diet I've been on. Recent events make for a jucier post.

I'd been semi-serious about my diet over the course of September, and managed to lose about 10-12 lbs. My wife has been swimming in the ocean with a friend for a few months and I asked if I could join in. Now both of them are very good swimmers, they're swimming a couple miles at a time now, and I've found I need to use fins to keep up with them. After several trips to Honaunau with them I'm considering ditching the fins... but then again I don't want to invite a heart attack down there right off the bat... so I decided I'd try some swimming in the pool and other cardio work before going for it. Well, the pool swimming has been eye opening, it's tougher than when I was young - but it's coming along.

Friday morning last week I had a blood test scheduled, so I did the fast thing from Thursday evening 'til the morning blood test. Drank a lot of water, both that evening and that morning. I've been pretty good about checking my blood pressure routinely since the swimming started, I'm trying to see if it's changing anything. So far no. The pic above is the history reading from that morning. Later on it would change....

After the blood draw, I'm heading home and feeling fine, and I see the trailhead to the Captain Cook Monument. Heck, I'll skip swimming and walk it! Genious idea Steve.

It's 10 am and I start walking. Well, the trail is pretty overgrown right now with the rains we've been having lately, and it's a little slick and the horse poops are a bit damper than in the part of the year when I've walked it in the past (irrelevant to the story, but thought I'd let people know about the current shape of the trail). 35 minutes later I'm at my usual turn around spot (I'm a little reluctant to do the last third to half mile that's so steep 'til I know I'm ready for it). Now I'm lighter, and arguably better conditioned than in the past when I've walked the trail, so I head up. I'm making good progress and after 14 minutes (I was watching the watch) I'm almost back to the trees/shrub area and decide to take a breather....

Shut down time. After a couple minutes I head off and get about 50 feet and can't continue. I rest a couple more minutes, feel OK and manage to make it about 20 feet and can't continue. At that point I'm worried. I felt no "event", so I rested a couple minutes longer then stood up, got dizzy and then at that point my vision went to black, green and bright white. Very trippy. I made it maybe 10 feet and had to sit again. At that point I'm thinking I had a stroke. I spent a couple minutes checking my motor skills, all digits worked, facial muscles worked, vision was ok when sitting down, I even juggled some rocks to make sure my hand/eye coordination was kinda OK. I felt pretty good, except when standing.

At that point I'm pretty scared. It's 11 am and I'm a bit over a mile down a hill from the road. So, I start stumbling my way up the trail the best I can all things considered (might have been stupid to do so). I couldn't take it any more and laid down for a coule minutes, then sat 'til a couple walked up the hill behind me about 5 minutes later. They asked if I was OK, my answer was "I'm OK, I guess, well, maybe not". I had some new friends for the better part of the next hour and a half. This whole event gave me a new found appreciation for strangers. A couple different groups offered me water along the way. I'd actually taken water and had run out shortly after the couple caught up with me.

Well, to shorten the story, we made it to the top of the hill finally at 12:30 and the couple drove me to the gas station to get water and some trail mix in case it was a blood sugar/dehydration thing, then dropped me off at the car and said they'd check back on me in an hour. I made a call to crew who was working with me that evening to tell them to get to the harbor and meet the customers and tell them that I was in the hospital so there wouldn't be a charter. I hated cancelling the charter on short notice, but there was no real choice at that point. Luckily, he (the crew memeber) happened to be in Captain Cook to drop something off at a friend's place and he got me to the hospital.

I wandered into the ER and saw the triage nurse... "What's going on?" "Well, I may have had a stroke, or a blood sugar event, I' don't know, I just failed the Captain Cook trail" So she sat me down, started asking the typical questions - what is your name, what is your birthday, what day is it, where are you, etc - repeatedly, had me squeeze her hands, hooked up the the BP cuff and asked what my normal BP was. At this point she's on the phone with someone inside. I was asked to stand for a BP reading, that lasted all of about 4 seconds when I started to black out. At that point I'm moved to a wheelchair and I can hear her on the phone saying 78/37 and syncope or something like that. I'm in the ER and they're hooking me up to IVs, EKGs, the little ET light finger O2 analyzer thingy and such in two minutes. They had a BP cuff on me and after the saline started flowing for a few minutes it read 82/43, then went slowly up over the next few hours.

Apparently I was quite dehydrated. By 5pm or so I was to a more normal BP level. They released me, told me to take it easy for a day or two, and drink lots of water, especially when I exercise. Well, I suspect I'll never exercise on an empty stomach again. As it stands, I'll be exercising near someone who's current on their CPR/first aid for quite some time. I don't want to take the chance there's something going on that predisposes me to this. I'm pretty sure it was the combination of 16 hours without food, the blood drawing (although it was a relatively trivial amount, 4-5 vials) and exercise in the sun.

In a wierd way, it was an interesting experience. One I hope I don't go through again. The scariest thing was the vision thing - I couldn't even tell what stuff was on the shelves at the mini-mart, it was just a bunch of glaring white packages to me, had to have help finding the trail mix. It never dawned on me that some basic functions, like vision, could shut down rapidly like that over a simple thing like not enough water.