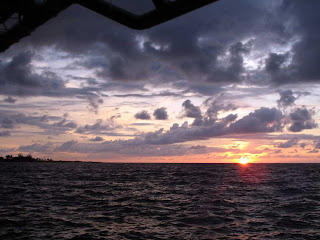 Here's a bit of a sunset photo from the manta dive the other day. We've been doing the Kona manta ray night dive a bit more frequently lately it seems. We're getting into that season where we get treated to some very nice sunsets.

The phone's starting ringing quite frequently lately so we're pretty darned busy through the end of the year. I'd recommend if you are looking at diving on vacation over the holidays you might want to pick up the phone and make inquiries/reservations soon, if other operators (no matter where you are headed) are seeing what I'm seeing it might get tight for people trying to make dive reservations last minute.
Posted by Steve at 4:44 PM 2 comments:

So it's December... a big northwest swell comes in... and the water temperature in Kona goes up 4 degrees???!!! 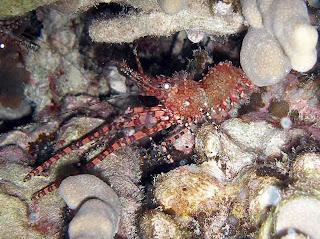 Last night I led the Kona manta ray night dive and I was toasty warm. Weird. A couple of weeks back the water temp took a tumble and I figured it was time to start thinking about getting into a 7 mil wetsuit for the first time since moving to Hawaii... then we had biggish surf for a week and I expected it to be cooler, but it's now sitting at 79 on a computer that maxed out at 80 degrees this summer. Very comfortable scuba diving right now.

Last night we did the manta dive. We pulled up to the dive site at Garden Eel Cove and could immediately could tell the viz was fabulous. Despite the late afternoon sunlight you could easily see everything on the reef from topside. My guess without being in the water for the first dive was that it had to be in the 200 foot or higher range. Even the customers, who had been on a dive a couple days back with about 200 foot of viz, commented on how clear it was and that they'd never dove in anything this clear in their diving the Caribbean. I went down for the night dive while Captain Cathy watched the boat for the night dive. There was virtually no plankton at the site. Two manta rays showed up and cruised the divers for a few minutes then took off... they know when the food's not to be found. At that point we turned it into a very nice night dive.

We do the night dive again on Wednesday (tomorrow) and Friday, and I'm hoping there's more plankton so the mantas stick around, but the night dive itself can be fabulous out off the Kona airport site. Later it was reported that there were no mantas present at the Sheraton site last night. We typically go to the airport site, which usually has larger numbers of mantas than the other site, unless it's just not happening there. We'll probably stick there for now since nothing's been seen down south lately... it's a much nicer night dive up at the airport site if the mantas don't show.

Here's a male Marbled Shrimp (Saron marmoratus), one of the shrimp we commonly see on the night dive when we're doing our cruise around on the way back to the boat.

Steve
Posted by Steve at 7:50 PM No comments:

Steve
Posted by Steve at 7:44 PM No comments: 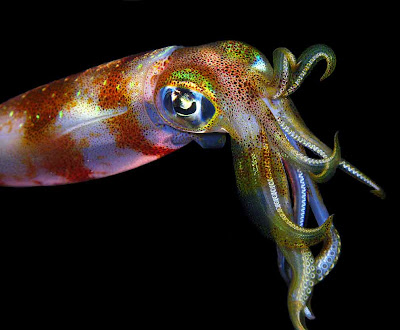 Kona is pretty well known for it's manta ray night dive, but scuba diving on night dives in general is very cool here. Lots of things come out of the reef at night, shrimp, lobsters, urchins, hunting eels... even squid, like this one I took a picture of last year. When I'm leading the manta dive, I try to make it a point of taking the "long way" back to the boat and look for cool critters - you never know what you might come across.

So I thought I'd put up a quick post about the surf we're expecting here. Big surf, in the 20 foot plus range, pounded the north shore of Oahu yesterday. They said to expect it to bump up to the 30-50... yes, 50 ... foot range in the next day or two. Fifty is huge, I don't think we've had that on Oahu in the years I've lived in Hawaii. In Kona we're often shaded by the other islands from north and northwest swells, and those 20-30 foot swells they get on the other islands can turn in to 6-12 here much of the time - that's still quite diveable - but it'll be interesting to see if this pans out. If it does then we'll probably be shut down for a couple of days here too. Usually we don't get significant cancellations due to swells in months outside of January and February, sometimes none in any given year.

If the surf comes up, I'll see if I can get some pictures.

The latest in Kona scuba diving.... 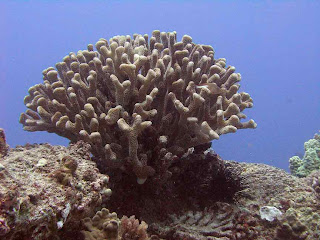 Man was it windy yesterday. We ended up rescheduling last night's night dive for tonight. We had a front come by and park over the island or something because we had huge winds all day long 'til evening. When that happens it's usually a one day event... it's quite nice today.

One of the nice things about Kona scuba diving is that we're generally protected from winds that much of the island chain sees on a regular basis. This makes for all day diving on most days.

We're starting to see the winter swells coming in. So far the swells haven't been too bad here, we're fairly shaded by the other islands, so we don't see as much big water. I'll be keeping an eye on the west swell today. We're supposedly getting some huge stuff coming in starting Sunday/Monday. They're talking upwards of 40 foot faces on Oahu. There's been a couple of swells that were supposed to be in the 20 foot plus range off Oahu that basically didn't affect us at all in Kona the last couple of weeks, but a 40 foot swell usually means for big stuff here too... we'll be watching.

Here's a nice elkhorn coral head. We're always looking inside of these for critters, some of our nifty oddball fish tend to hang out in them.... Reticulated Frogfish, Leaf Scorpions, Gumdrop Gobies, Harlequin Shrimp and other stuff can be found on occasion.