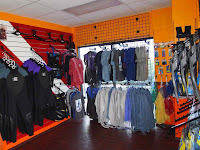 Well it looks as though I'm finally going to be able to get the retail side of Wanna Dive open soon. For a bit over a year I've had a space and set it up as an office and gear storage, along with a few shirts masks and a few scuba do-dads to sell on the side. It's looked like a dive shop is coming for quite some time... well, the time is getting to be oh so much nearer now. 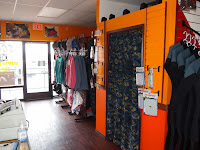 During that time I've had lots of people ask why I'm not manning the shop, well unfortunately you need to have lots of product to sell to really justify spending a few thousand a month manning the shop, and I can't be in the shop and on the boat at the same time. It hasn't been in the cards just yet. This last November I went to DEMA, the big industry show, with the intent to find some lines for the shop and order it in. 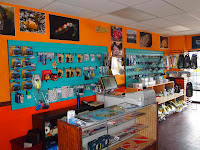 Over the course of December and January the gear's been coming in. I was crazy busy with charters in December and the first 8-9 days of January, since then (unfortunately with the help of the arrival of scuba unfriendly surf) I've had some spare time to where I could spend time in the "shop" and get it put together. Along with the product, I've been bringing in extra fixtures, shelving, racks and such and have been setting it all up and getting the gear on the walls.

It's not yet where it will be down the line, but it's to where I can show it off and say the store's coming soon. This next week I place my help wanted ad. I'm hoping to be able to open the shop up full time come about 3 weeks from now so we'll be in the swing of things before the spring break rush hits. The February dive charter schedule is starting to shape up nicely, so I'm not sure how often we'll be around 'til the day I officially open (whenever that is) - once that happens it'll be 7 days a week, except major holidays, Ironman day (the highway out front is closed that day)... and maybe Superbowl Sunday.

We're located at 74-5035 Queen Ka'ahumanu Highway ste 1-b. It's super easy to find... it's across the Highway from Honokohau harbor, right next to the Tesoro gas station.

LOTS of whales in Kona right now... wish I hadn't forgot my camera the other evening... 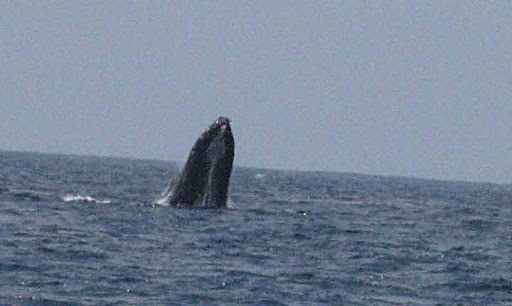 Hi,
The other evening we were out for a night dive and during the first dive (late afternoon) there were three whales milling around about a couple hundred yards off the dive site (Garden Eel Cove). About 5:30 ish the whales started coming in closer and suddenly a baby whale breached about 60 yards (it was closer to us than some of the other moored boats were), it breached again, then an adult breached, a few seconds later the other adult breached, then all three breached at the exact same time.... the whales kept breaching one or two at a time and went up to the north end of Garden Eel Cove, then turned around and made a pass back by all the moorings. They were pretty much 60-100 yards off the moorings at all times... very close. With the continuous breachings that close, it sounded as if fireworks were going off.

Quite spectacular! This went on for about 8-10 minutes. The baby whale seemed to have a little more energy. The first breaches were full body breaches by both the baby and the adults. The adults got to where they were breaching more like the photo above (taken a couple years back) much of the time, adding in a few pec slaps for a while.

Unfortunately our divers were under and unaware of what was going on above. Three other boats full of divers that had already come up witnessed it, the snorkel boats were rounding the corner to come into the bay just as it ended.

I'd left my camera at home, bummer. We were close enough that they'd have made great photos. I've never had whales breach that close that many times. No mantas, but the night was worth it just for the whale show.

Email ThisBlogThis!Share to TwitterShare to FacebookShare to Pinterest
Labels: whales

Been LOTS of big surf in Kona the mid part of this January....

And hopefully its gonna wane. I was looking at the Magic Seaweed Hawaii swell chart (hopefully this link works) and it looks like it's coming down and we're going to be relatively clear here in Kona the next week. Usually when it's down to 6-7 feet, and a different direction than straight west, you can find a place to tuck in and dive. On the 7-8 and 8-9 foot days it can gets tricky at times, sometimes undiveable (is that a word?). When you see solid green hit the coastline, it's pretty much shot.

I've been down at the office on the days we haven't gone out trying to make it look like a store... it's really getting there. I'll be ready to post a photo or two soon.... still got a bit of a mess to take care of before it's really ready to start showing off.

We've been debating on when to go full time with the "shop". It's kind of dead as far as diving right now (a lot of that might be because of the surf and people are getting to town and seeing it and just not calling), historically for my business the last half of January and the first half of February are very slow. I'm looking to hire 1-2 crew members the first week or two of February and then we'll probably open it up for regular hours around mid-month so we've got the routine down by the time spring break business hits. It'll be interesting.

Email ThisBlogThis!Share to TwitterShare to FacebookShare to Pinterest
Labels: surf 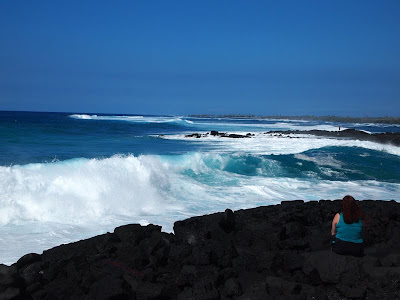 So the surf has been HUGE the last few days. Here's a shot of the mouth of Honokohau Harbor yesterday. The whole area was washed out. It's on it's way down right now and we're hoping it clears up enough to do some intros tomorrow.... we'll see.

My computer has been giving me problems for quite some time, and started making bleeping USB connecting sounds (literally bleeps, not that I'm trying to sneak in a blog friendly cuss word) at me last week, then yesterday it completely died. Luckily I had purchased a computer for the shop, so today was spent in part getting it set up.

I wanted to get this photo on it to post for the blog. There's no photo editing program on the computer so I downloaded Picasa... I'll tell you right now it comes off as soon as I have time to get Photoshop on the computer, can't stand it already.

Been working in the shop the last few days trying to put it together. It's an embarrassingly messy disaster area right now... that should end in two days, I almost have all the fixtures nailed in and then I can get it organized.

The surf's coming down, but a storm's supposed to hit tomorrow and dump a lot of rain on us. Rain does not actually affect the diving in Kona because there's little soil near most of our dive sites to cause runoff issues, tomorrow's diving will be more dependant on whether wind and thunderstorms come along with the storm. Hopefully it'll just be a bit of rain and relatively calm seas. 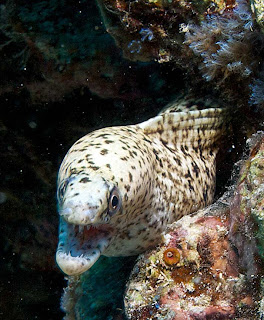 I've been real busy this holiday season and put the blog on the back burner for a while. We're now back to the typical slow January so I've got some time to catch up on a few things.

So... diving's been really good up 'til the last week and a half or so. We had one or two gnarly days last week, then another couple bad days (real bad on Wednesday) that made for cancellations this week. Luckily, in Kona once the surf drops the viz can be back to pretty mcuh normal in a day at many of our dive sites. We're diving again tomorrow morning and in the evening we're going out for the manta dive, then it's a couple days off because I've got nothing booked, and then we'll see what early next week brings. According to Magicseaweed.com it looks like the biggest swell we've seen yet this winter hits on Monday. Hopefully it'll be a bit smaller than it currently looks to be once it gets here.

Now that we're coming into a slower time, I'm gonna get serious about getting the shop together so it's more than an office and storage spot for gear. We've been bringing in some product and extra fixtures and I'll be spending my "days off" from charters putting it all together. The goal is to get it all together, hire additional crew and get it open in the next 3 weeks or so.... lots of work to do! I'll have plenty of updates once we get open, odds are I'll be in the shop twiddling my thumbs a couple days a week so I'll have some computer time available.

Here's another shot by customer Jim from last month. I've been too busy to carry a camera on most of our dives so I've got nothing of my own for now, next week I'll make it a point to get a dive or two in with the camera. This is a nice small white phase Stout Moray. This eel comes in both a white/light phase and a darker (brown with speckles) phase. I consider the darker phase to be the more common one, but that's just my speculation as I seem to run into more of them.

Steve
Posted by Steve at 9:35 PM No comments: