Wow. You couldn't ask for better weather or skies in Kona the last several days... 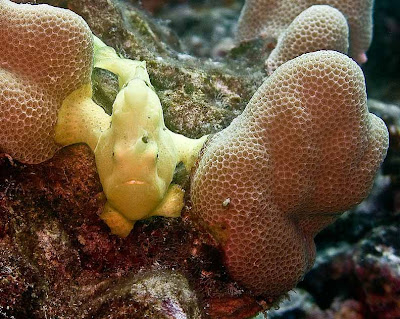 The tradewinds died out and were replaced by north and northwest winds the last few days, it blew all the vog out and the skies have been clear and bright. Today was partly cloudy but still absolutely beautiful.

I had the day off today, start another stretch of diving tomorrow. It looks as though June will be quite busy at this point.. lots of charters started, now I just need to add additional passengers on the dives to fill things in.

Here's a frogfish from one of our recent dives.

Steve
Posted by Steve at 7:58 PM No comments: 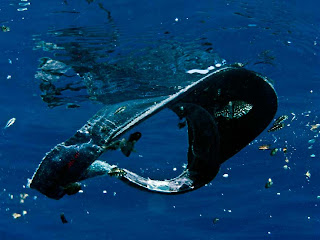 We've been real busy this last week, dives every day with a couple of night dives thrown in on top... I'm due for a nap.

Among the passengers this week was a fun couple that were relatively new to diving (less than 50 dives) who passed along something they'd heard about to Bob and I (I'm in the 2K dive range and Bob, who's logged every dive he's done, is at 4900 and then some) that we'd never heard before - not that we can remember anyways, we're both over 50 - You can talk to your buddy underwater by... now this is cool... sticking your regulator on top of his/her forehead and talking through it. Well, it looks stupid, and you better clue your buddy in ahead of time that you might try it, but it does work to some extent. You've got to use few words, and avoid words that are tough to say with a reg in your mouth (I tried the word "big" and it didn't come across, but "huge" was something the customer I tried it with clearly understood). Apparently someone they dove with said it was a Navy Seal trick.

Now I really doubt I'll be using this often, but in rare cases that we have to communicate it's an option.

Here's a photo of something I find interesting... We had a mild junk line off of Eel Cove the other week (currents sometimes make a line of things caught in them) and we found this visor floating off the dive site. Take a look closely... it's got it's own eco-system going. Any time you find something floating in the ocean, there's no telling what else may have been attracted to it and is living around it. In this case it's a bunch of little fish that have taken up residence on the hat. I've seen the same or similar fishes around Oceanic White-tip Sharks and some big jellyfish we see on very rare occasions. I don't know what they are called, but I've even had them show up next to my divers when I've led blue water dives. Most anything floating out in the open will eventually have other life surrounding it apparently.

Steve
Posted by Steve at 8:18 PM No comments:

Whoohoo!!! Summer seems to be coming.... 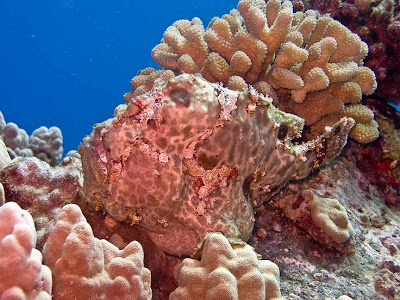 Wow, what a difference a few weeks makes... the water temp has risen to a point where it's quite comfortable for those of us who dive here nearly every day, and the water's flattened out most of the time lately (not that it was all that big of surf earlier). Water temp today was a very comfortable 75/77.

Earlier in the week we were able to go south to the Red Hill/Kealakekua region, and yesterday we were able to go way up north to a spot that we pretty much only go with "regulars" - don't feel slighted if we don't get there with you, it's just that it's different and once you've been to 30-40 dive sites we here want to start showing our "regulars" something new. It's fun for us to dive something we don't see all the time so on occasion we try to cover some distance when the boat has people we've done a lot of diving with.

Today we had a light load, went up to the Golden arches area and just slowly scanned the area for a couple of 78-80 minute dives... were rewarded with a good sized frogfish (here it is, check out the full belly, must've eaten recently), Leaf Scorpion, Peacock Flounder, Harlequin Shrimp, and loads of other cool stuff.

Steve
Posted by Steve at 7:41 PM No comments:

Water temperature in Kona Hawaii is bumping up... making for some great scuba diving... 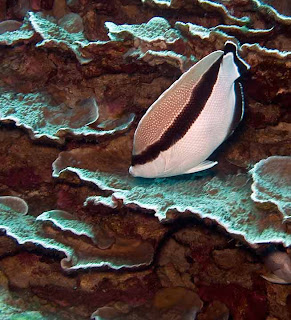 Aloha,
Back to diving again every day for a while... the month has turned into a fairly busy one and June's starting to fill with charters.... plenty of space still on most days.

Here's a shot of a Bandit Angelfish (Apolemichthys arcuatus - the genus on this fish has changed at least twice since I first saw them back in my aquarium shop days). We found this one on Friday. Hawaii only has a very few species of angelfish, and this is by far the largest (reaches 7 inches or so). We saw a pair of them but I couldn't really get any good shots with both of the fish in them. On the Big Island, we typically see them below 60 feet or so, more likely below 80. In the older islands further north, say Kauai and to the northwest, they apparently are shallower and seen more often.

Today the water was very flat and we decided to head south to the Red Hill area for dives. We dove at "Ridges" and "Henry's Cave". Bob led the first dive and I led the second. Good conditions... the water's really warming up the last 2 weeks, it's roughly 76/77 now suddenly. I shed the shorty I was layering with and just went with my full suit and was fine. Out at depth on the edge of the reef we probably had roughly 150 foot of viz. A manta ray swam beneath us as we descended and one of the divers saw two turtles in the distance. Other cool stuff was a pair of Flame Angels, a real good sized (child's fist sized roughly) yellow hairy hermit crab that had taken over a beautiful triton trumpet snail shell, a three foot (pretty small) or so long whitetip reef shark and other goodies. Surprisingly we didn't see much in the way of shrimp or nudibranchs, seems to be the case down south lately when we've been there for some reason, even though both sites appear to be topographically good candidates for them.
Posted by Steve at 8:13 PM 6 comments:

A little underwater video from today.

Yellow tangs from Kona Hawaii from Steve on Vimeo.

Yellow tangs on the reef. Took it with my Canon G9. 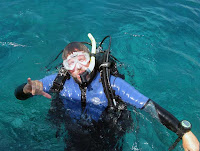 Yup, I wear a snorkel. I did a heckuva lot of shorediving when I first started diving, and after a few hundred dives it got to where I feel odd without one. If you go to a scuba message board and bring up snorkels, it'll raise a crazy amount of debate... it's a hot topic for whatever reason and there are people who are rabid pro or con. I figure to each his own. In our case, we come up and down at the boat, so there's no real need for a snorkel in most cases... but they can be handy if doing a drift dive or for people who are prone to not following the guide and getting themselves lost (sort of a peeve of ours, rarely happens, I can only think of 2-3 times in 10 years of doing this, but it disrupts the dive when it does).

So if you asked me how the month is looking this time last week, I'd have said pretty mediocre. It's our "slow" season and last week I had all of 6 charters lined up for the rest of the month with little phone action... that changed suddenly a couple days ago... I've got 20 charters lined up so far with more interest. Should be a reasonably busy month after all. Funny how it seems to go in spurts.

I've been out of the water for 5 days now... it'll be nice to get back in tomorrow. I'm hearing it's warming up a bit, so it'll be curious to see what the temperature is.

Email ThisBlogThis!Share to TwitterShare to FacebookShare to Pinterest
Labels: blabber 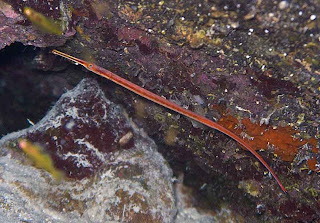 The manta dive has seen 15+ mantas a night for the better part of almost a month and a half now. It's a spectacular event for divers and snorkelers. We did three of them last week, in addition to some day outings - made me tired... I'll use that as my excuse for not posting in that time (but it's more likely that I just haven't had much to say during that time). Going out on the night charters and then having to come back the next morning (or not, depending on the schedule) takes it out of me. I normally hit the hay around 10:00-10:30, after a manta dive it's more like 1am and I don't feel normal for a couple days... what ever happened to the good ol' days when 4 hours was plenty of sleep as long as it wasn't every day? It's our slower season right now so I've got a few days off before it all starts again.

I just got an e-mail that the Manta Ray protection act has made it through both the State House and Senate and is now waiting on the Governor to sign it. The mantas have been unprotected here and there's been a few attempts to get them protected so someone won't come in and harvest them all. Kona is the one place in the world that you know exactly where the mantas are likely to be 30 minutes after sundown, so that raises the risk of them being taken efficiently if someone were to decide to target them... this should help keep that from happening.

The pic above is of a Redstripe Pipefish (Dunckeroampus baldwini). Pipefish are related to seashorses, the males carry the eggs on their undersides, unlike the male seahorses which carry their eggs in a pouch on their bellies.

Reading in John Hoovers new book , which happens to be probably the best book on Hawaiian fish available right now, I just noticed that these particular pipefish were endemic - I didn't know that before tonight. They are typically found in pukas (Hawaiian for "holes") or cracks in rock formations. They're small, maybe 5 inches long in total, and quite slender so they're tricky to point out to other divers. We've got a few of them stashed at a few dive sites so we do get to brief our divers and show them from time to time.
Posted by Steve at 9:15 PM No comments: