Pat and I were busy packing up our house and one of our old friends dropped by, old friend being a person who stayed in our downstairs vacation rental 13 years ago and has since become a friend we look forward to seeing every few years when he visits Kona.  While we were shooting the breeze out on the rock wall in the front yard he looked up and said "what's that crawling on the power line?"  Pat and I looked up and saw that it was a Jackson's Chameleon.  Cool!  I've seen them crossing Napo'opo'o road about a hundred foot higher in elevation than our place, and know they're all over further up the mountain, but haven't actually seen them at our property (not that we're looking) before.

Perhaps I should say NOT so cool, they are an invasive species.  Jackson's Chameleons are native to East Africa.  The story goes is that someone over on Oahu down around Kailua/Kaneohe had a bunch of them breeding in outdoor netted enclosures and a storm came through and they escaped.  From there they went uphill to the popular pali park hiking areas and eventually were spread all over the islands by people who thought they were cool.  Invasive species are a real problem here in Hawaii, but it does make things interesting.... we've had a wild boar problem this week, tearing up the yard, digging up plants and such, first time in years but it does happen. 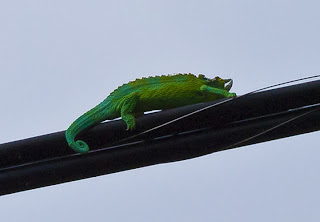 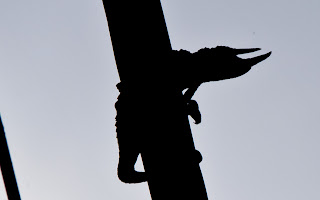 Back to the lizzard... I broke out my camera and managed to get a couple of shots, kinda tough but I had picked up a zoom lens for my Pen e-pl1 a little while back.  Here's a couple of shots, one from the front yard, and one from underneath on the neighborhood road. This one is a male, you can tell because it has the 3 horns all males have.  It was staring at a spider web with a couple bugs in it.  These guys are neat in that they have a super long tongue... roughly triple the length of their body or so, and they'll nab a target a significant distance away.  They're about a 7-8 inch long lizzard, but with the horns you'll find them magnified to gigantic proportions for monster/dinosaur movies on occasion.

I did talk to someone years ago who said he used to collect them about 500' higher up our mountain than our elevation.  Apparently you can go out in the coffee and use a flashlight at night, and their eyes (independendantly articulating, they can look multiple directions at once) apparently reflect light very well.  I might have to walk out with a flashlight and look at the bushes to see if I can find any before I go - I just hope the eyes looking at me aren't those of a 200 lb tusked wild boar...