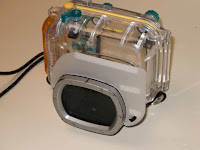 Phew, long post title.... Here's the Canon housing for the G9, and the same housing with a Duron M67 adapter and two Inon UCL-165 closeup lenses added on to the housing. Pat and I recently picked up Canon G9 cameras and their associated Canon housings. We really love macro shots and saw some amazing stuff on one of the scuba message boards several months ago and were lusting for whatever allowed those pictures to be taken. After some sleuthing, not all posters want to share for some reason, we found the trick was by adding Inon UCL-165 closeup lenses. 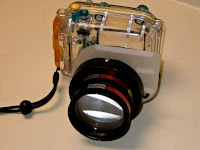 This is a common practice by some people who have housings with threaded ports, you can add "wet" lenses to in effect get either closer or a more wide angle look. The Canon G9 and other simialar series Canons however have an oval port, which requires a 67 millimeter threaded adaptor. The one we found is manufactured in France and is readily available through one or two Japanese mailorder houses (google Yuzo Kanda to find the one we used). 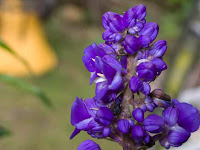 Once the adapter is on you can add the closeup lenses... you can even stack the lenses to get a greater closeup effect. The first picture in this series is of a blue ginger out back of the house. I took it with the camera with the macro lenses from almost as close as it'll go. 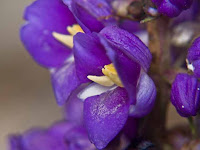 The second photo is what the camera will do with a single closeup lens added... much enlarged from the original photo in comparison. The third of the series is the same flowers with a second UCL-165 lens stacked on top of the first... much closer yet.

In underwater photography, closer is better... the less water between you and the lens the less to interfere with the image. With this particular camera and housing combo, you can add a single Inon UCL-165 closeup lens and still use the internal flash. 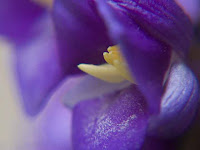 I have yet to try the second lens underwater as of yet, but I suspect it'll require an external strobe as the whole front end of the housing and lenses stick out far enough from the flash and you are close enough to the object that a portion of the internal flash will be blocked by all the add-ons.

The pictures above were quickies just to give you an idea of how much maginifcation the lenses give. I suspect it'll be tricky to get great underwater photos with these, but when everything goes right it might be just quite spectacular. The main reason you want to try to do all the closeup with lenses rather than just blowing it up in post production by cropping with an editor, is that everything you can do optically before working on it will give you a better picture in the end if you try to blow it up to any size.... hard to explain, but if I wanted to take a face photo and blow it up to say (I'll use extremes) 2' by 3' and instead of just taking a face shot I took a shot of the whole person, I'd have to crop out the whole picture except the face and by the time I blew it to umpty-ump times it's original size in post production it'd be very grainy or pixellated... you're better off just shooting the face only.

I've been out of the water with an ear infection for a week and a half... I'll report more soon when I can. I did pick up the external strobe I was looking at and couldn't figure it out underwater... I may have to read the instructions... oh, the horror!! I only had one dive with it before the infection kept me out, so taking the fact that nearly every time I take some new camera underwater I virtually always hate the results, I'm not worried about being able to figure out the flash.

You just had to post that! I have a recently purchased Canon G9 but have not committed to buying the underwater housing for it. For diving I use an older Nikon digital and housing. Another push or two, maybe some pictures of what you get with the macro, and I will be spending more money!

Hope you get well soon, may the ear infection heal quickly so we can see your under water photo soon. :)

Here is a vote for you in BOTB.

Andrew, I have the Canon housing and it does a pretty good job. Ikelite makes a housing for it that's real nice that'll take the add on lenses more readily apparently. I'm still working on getting used to the new lenses and the flash, so far I get better results with just the straight housing, but I need to get a few dives in alone to practice as I can only take a couple shots here and there when I'm leading dives.

Where did you buy Duron M67 adapter?
How much does it cost?

I got it at uwdigitalcamera.com

I couldn't find it in their catalog just now. You may have to e-mail Yuzo to see if it's still available or if they have some other converter available.